Charles Darwin gave his name to a great Australian city

This edited article about Darwin in Australia originally appeared in Look and Learn issue number 757 published on 17th July 1976. 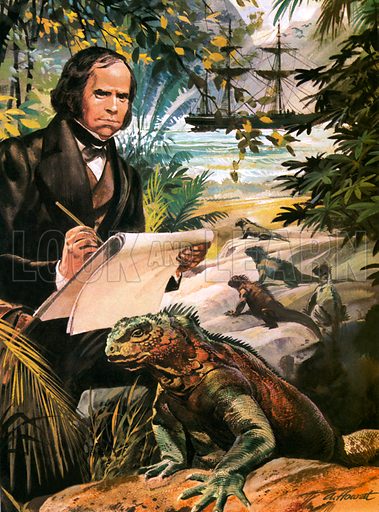 Charles Darwin on the Galapagos Islands by Andrew Howat

It was on Christmas Day, 1974 that a hurricane named Tracy hit the northern coast of Australia and virtually wiped out the 27 square mile city of Darwin, chief port and administrative centre of the Northern Territory. The rest of the world was shocked at the extent of the damage, although most people had to reach for a map in order to discover exactly where Darwin was.

Gone were the 1930s when it had been well known as the goal of daring round-the-world flyers, even though the name was familiar. Probably, people surmised, it had been named after Charles Darwin. But had the great British naturalist ever been as far afield as Australia? The doubts were not surprising, for few associated photographs of a bearded 80 year old with the young man of 22 who had made one of the most significant voyages of all time. This was a voyage to the New World in 1831.

With the help of an artist, Darwin’s task was to record and obtain specimens of the plant and animal life of the countries visited, and for the next five years he worked with enthusiasm as the Beagle, on which he was travelling, slowly made her way along the coasts of South America and onwards to lands that were still mentioned very hazily in even the best geography books. Tahiti, the Maldives, Keeling Island, Tasmania, New Zealand, Australia, Darwin saw them all, and as he noted, collected and catalogued his specimens a new and extraordinary conviction began to form in his mind.

It had begun to grow after his visit to the Galapagos Islands, where he had light-heartedly ridden on the back of a giant tortoise and faithfully logged its speed as 4 miles per day. The islands abounded in a number of different types of finch, each specially equipped by nature for a particular task. On one island the birds had strong beaks for cracking the local nuts, on another they had small beaks for catching insects. There were woodpecker-like finches, and fruit-eating finches and even one that dug grubs from holes with a cactus spine. It seemed to Darwin reasonable to suppose that they had evolved, and adapted their shape over the centuries in order to suit their surroundings.

As he studied the kangaroo, the wombat and duck-billed platypus of Australia the feeling grew, and when in those waters he studied the tiny marine life that made up coral he found himself thinking that a coral atoll must take at least one million years to grow.

Charles Darwin’s study of plant and animal life led him to form a theory of evolution. This inspired his famous book, On the Origin of Species, and finally convinced the thinking world that living things had not just appeared on earth in their present form but had evolved from primitive organisms over countless ages.

The city that took Darwin’s name may not always have been well known in Europe, but to the men and women of the remote Northern Territory it had always been a centre of civilization, a place to meet other people and a vital link with the rest of the continent.

Its first attraction was a deep natural harbour, and by the latter part of the 19th century the population was growing rapidly with newcomers from a dozen different nations. Pearl divers arrived from Malaya and Japan to harvest the local waters, nearby gold strikes lured miners. Good fishing started a busy industry and hundreds of Chinese labourers came to build a railway to the gold fields. By 1872 there was a 1973-mile-long telegraph line to Adelaide and eventually a great road known as Stuart Highway that went to Alice Springs, 954 miles to the south.

Darwin’s greatest influx of people came in World War II, when 100,000 Australian and American soldiers were posted to the Northern Territory to guard against a possible invasion by the Japanese. The invasion never came, but enemy aircraft rained bombs on Darwin, and with the coming of peace the city had to be almost completely rebuilt. The mineral and agricultural wealth of the area brought thousands of civil servants to administer the booming business projects, and soon they made up nearly one third of the 25,000 population.

Everyone agreed that Darwin was a fine place in which to live, a tropical home that was even closer to the Equator than Tahiti or Khartoum. True, it was in the monsoon belt, and during what the locals called the “Wet” the rain bucketed down, but for the rest of the year there were blue skies, the scent of frangipani blossom, and palm trees rustling in the warm breeze. Because of the climate, up to the minute houses were lightly built and most owners had, or planned to have, a swimming pool in their garden. Nobody could have asked for anything better, until Hurricane Tracy struck on that fateful Christmas Day.

When the raging wind finally dropped, most of the city had literally been blown away. It was calculated that 40,000 people were in Darwin at the time, some resident, some holiday visitors. In a matter of minutes 48 were dead, 25,000 were homeless, for the lightly constructed houses smashed and splintered like matchboxes, while their corrugated iron roofing caused terrible injuries as the torn metal spun about the streets. There was no water, no electricity. Cars had been tossed into the air and dropped bodily into swimming pools, a wrecked air liner lay in the airport controller’s garden and the harbour was a litter of swamped and sunken vessels.

Cholera and tetanus serums, bottled water and electricity generating plants were flown in from all over Australia, and an airlift was started to evacuate the homeless. For a time it was feared that there would be a serious outbreak of disease, for more children were becoming sick from drinking polluted water than had been injured by the storm. But soon everything was brought under control. There was talk of abandoning the city altogether because of the danger of future hurricanes, but the people of Darwin had other ideas. First of all in ones and twos and then in plane loads the evacuated families moved back and began to rebuild their shattered homes.

Offices and shops grew busy again. Two years after the tragedy people have not forgotten Hurricane Tracy, but it will take more than a high wind to drive the Aussies out of Darwin for good.