The Conquistadors decimated the native population of the Caribbean

This edited article about the Conquistadors originally appeared in Look and Learn issue number 745 published on 24 April 1976. 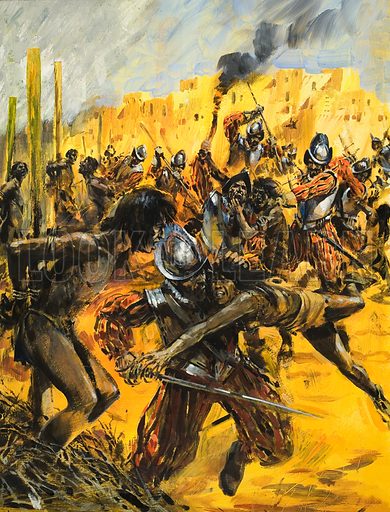 The Conquistadors burnt hundreds of Indians at the stake during the Tiguex War of 1540, by Graham Coton

Long before the nightmare that was the slave trade carried hundreds of thousands of black people to the West Indies and America, an even worse fate befell the original inhabitants of the beautiful islands of the Caribbean. In less than a century the Spaniards had virtually exterminated them.

The official discoverer of America, some centuries after the Vikings had almost certainly reached there around A.D. 1000, was the Genoese Christopher Columbus, in the service of Spain. The great sailor and explorer was no monster himself, but his discovery triggered off some of the worst atrocities in recorded history.

The chief witness to them was himself a Spaniard, a noble Dominican friar, Bartholome de Las Casas, who wrote of the “quiet lambs” who lived in the islands, and how the Spaniards swept on them like “the most cruel tigers, wolves and lions, enraged with a sharp and tedious hunger.” And he kept up his attacks, he and a few brave followers, until he died in his 90s. This awful period is sometimes memorably referred to as “the Tears of the Indies.”

Columbus touched down in the Americas in 1492, possibly at Watling Island in the Bahamas, then later at Cuba and Santo Domingo. It was a year of miracles for Spain, for in 1492 the last Moors were driven out of the peninsula after centuries of domination of much of the country. Meanwhile, Columbus was noting the peoples that he found, artless, generous men and women and children, who believed that he and his men had come down from heaven. Soon they were to think that they had come from hell.

Columbus took six natives back to Spain with him to show his Spanish masters, then he returned to the fabulous Indies with a fleet or 17 ships bearing 1,500 colonists. On this voyage, ominously for the simple, trusting people of the enchanted islands, gold was found.

Of course, not all the islanders were simple peace-loving people. The Caribs were fighting cannibals. But no doubt the Spaniards, bringing the cross as well as the Sword to the Indies, could have befriended them if they had remembered the life of Jesus instead of concentrating on gaining quick riches, using the natives as slave labour, or burning or butchering them if they refused to be converted to Christianity.

Columbus at least tried to prevent the exploitation of the gentle people that had first met him and his men, though he had no compunction about shipping out 600 captured Caribs to a life of misery as slaves of the Spaniards at home. And it must be stressed that the Spaniards of this period themselves led harsh enough lives at home, with the dreaded Inquisition lowering over every aspect of their life.

They were remarkable men by any standards, iron-hard soldiers who in the early years of the sixteenth century performed prodigies in the New World. Less than 200 men under Pizarro conquered the mighty Inca Empire of Peru only a few years after Cortez toppled the Aztec Empire of Mexico. And for all the gold-lust that drove these men on, they genuinely believed that they had a duty to convert the heathen. Alas for those “heathen” that the teachings of de Las Casas were not followed.

What happened in the islands is simply told. The natives – “gentle, merry and walking beauty”, as Columbus had found – were annihilated. The main reason was the establishment in the New World of the encomienda which was a land grant, along with which went forced and unpaid Indian labour for life. Originally, Queen Isabella of Spain had frowned on this vicious law, but to the horror of de Las Casas and other friends of the Indians, it flourished.

There appeared to be an unlimited supply of native labour in the islands, various population estimates ranging from under a million to four million. But within a very short period the number had been drastically reduced by overwork, ill-treatment and the brutality of the Spaniards to any Indians who dared to show resistance. The simple, primitive paradise was rapidly changed into a nightmare.

And when finally numbers fell too low, natives from distant islands were kidnapped and transported to the main Spanish centres, where they died even faster than the original inhabitants. White men’s diseases, to which the natives had little resistance, killed off many more, and an unknown number of Indians were burnt to death after they had dared resist the conquerors. In its sheer completeness, it ranks perhaps as the most total large-scale annihilation in recorded history.

Take the island of Hispaniola, which now consists of Haiti and the Dominican Republic. Experts believe that there were between 200,000 and 300,000 natives there in 1492. By 1548 there was probably fewer than 500 full-blooded Indians left; by 1570, the survivors were to be found in two tiny villages.

Again, in the Bahamas, where the original inhabitants were mostly sold off into slavery, those who escaped were hunted by killer-dogs. If they were caught in a less drastic way, they were burned or hanged.

It is impossible to end such a saga happily, but it is only fair to state that if the crimes of the Spaniards were worse than those of any other nation, no other nation produced finer examples of humanity than Bartholome de Las Casas and the noblest of his successors. In what is now Paraguay, Spanish and other Jesuits set up a veritable Utopia which lasted until the mid-18th century; and the Spanish record in California was also good.