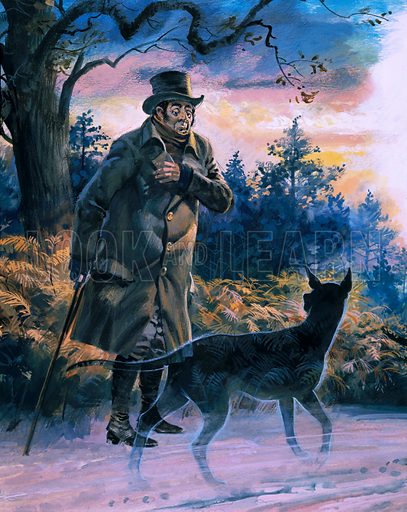 The ghost of John Tregeagle has the impossible task of emptying a lake with a small shell riddled with holes. And should he feel like escaping, the phantom pack will soon drive him back.

It is said that you can hear them baying almost any night on the lonely wastes of Cornwall’s Bodmin Moor, a ghostly pack of huge hounds for ever in pursuit of their quarry. But terrifying though they may sound, the passing stranger has nothing to fear, for the Demon Dogs are chasing someone as ghostly as themselves. His name is, or was, John Tregeagle, and he is paying for the crimes he committed during his life.

Whether one believes in ghosts or not, a man named John Tregeagle undoubtedly lived in Cornwall during the early part of the 17th century. According to legend he not only murdered his wife and children but used his position as a magistrate to escape detection and amass a fortune unfairly confiscated from other people’s estates.

As his life drew to a close Tregeagle seems to have grown apprehensive about his chances of being admitted to Heaven, and gave away enormous sums to the Church in the hope that he would be allowed to rest in peace.

Calling up John Tregeagle was one thing, but getting rid of him once the case was over was another. After having tried in vain to make him go away, the local wise men decided that the safest course was to keep their unwelcome visitor so busy that he wouldn’t have time to cause trouble. Accordingly they thought up a task that was calculated to daunt even the hardest working of ghosts.

Tregeagle was given a sea shell riddled with holes and ordered to use it as a scoop with which to empty a deep lake in the middle of Bodmin Moor, while a terrible pack of demon dogs stood guard over him.

The ghost of the wicked magistrate is still hard at work today, although he is frequently driven to distraction by his impossible task and runs away, only to be rounded up by his savage guardians.

Another version of Tregeagle’s everlasting punishment has him moving all the sand from one Cornish bay to another, while the swift moving currents in those parts promptly undo his work by moving it all back again.

The legend of John Tregeagle calls to mind similar stories from other parts of the world. The tale of the Wandering Jew and that of the Flying Dutchman both feature men who are trapped on Earth for ever, unable to find peace as they suffer the consequence of what they did while they were alive.

Unlike most accounts of hauntings, there is never any attempt to make the story of John Tregeagle even remotely believable. That the man himself was a real person is beyond question; it is only his adventures as an earth-bound spirit that one dismisses as folklore. The real ghosts are the phantom dogs, and it seems likely that Tregeagle’s adventures have only been introduced in order to account for them.

Accounts of spectral dogs turn up with extraordinary regularity in Britain, which at first sight is curious. A nation known throughout the world for its liking for dogs might be expected to choose some other kind of supernatural animal to dread. But both Cornwall and East Anglia are well haunted by dogs that not only look horrifying but are often thought to be harbingers of doom into the bargain.

Norfolk is a flat county, thinly populated, with mile upon mile of lonely coastline bordering the grey North Sea, and anyone who walks alone along the Northern coast road between Hunstanton and Cromer has to be very unimaginative not to think of the possibility of meeting Black Shuck.

Black Shuck is a huge, black, ghost of a dog who haunts that road, loping along it in a special, lazy trot. He has been seen so often and for so long that the expression “shuck trot” has entered the local language to describe this particular stealthy movement. Sometimes he announces his arrival with an appalling howl, but more often than not he just lopes along silently. Norfolk fishermen believe that anyone who meets Black Shuck will die within a year.

The more fanciful versions of this four-legged ghost credit it with having eyes as big as saucers, but generally Shuck is accepted as being remarkably like any other large black hound. The fact that so many fishermen believe in him is accounted for by the fact that Shuck is thought to have lived his non-ghostly life as a fisherman’s dog.

During a storm, two men lost their lives at sea, and their bodies were washed up on the beach, several miles apart. One man was buried at Hunstanton, and the other at Cromer. Unknown to anyone, one of the dead men had been accompanied by his dog, and the animal managed to swim ashore, half-dead from exhaustion.

When it recovered it was unable to tell which grave belonged to his master, and so he pads along the country road for ever, visiting first one churchyard and then the other.

If one really believes in ghosts, this would appear to be a reasonable enough explanation. But if one goes far enough back into the history of Norfolk, one recognizes. Black Shuck as a very early European import.

“Shuck” almost certainly is derived from the Anglo-Saxon word scucca, meaning a demon. The Saxons always associated demon dogs with death, and old sayings such as “The Black Dog is at his heels” meant that a person was dying.

The description of Black Shuck’s eyes being “as large as saucers” brings to mind the dog in the fairy story, “The Tinder Box”, and it is probably no coincidence that Hans Christian Andersen was a Dane. So, with this kind of background, is there any point in believing in Black Shuck at all? Logically, the answer can only be, no.