This edited article about travel in Britain originally appeared in Look and Learn issue number 729 published on 3 January 1976. 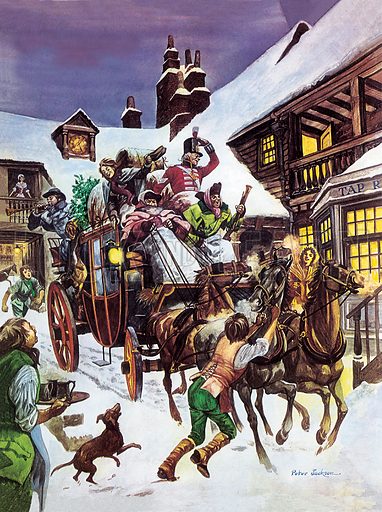 What fun, what marvellous fun travelling had become. The stage-coach was so handsome and the horses were positively beautiful as they stood impatiently waiting to be off. There was not a seat to be had inside the coach, and the outside was packed with people as well, all waiting for the magic moment when the coachman, the reins in one hand, his whip in the other, would give a signal with his foot. Then away they would go, men, women and children, bags, bundles and boxes, along one of Mr. Macadam’s new roads through countryside more lovely than it has ever been since.

This marvellous period when travelling by stage was such an off-duty joy took place roughly between 1815, the year of Waterloo, and the 1830s. Then a new power rapidly overtook the old one and destroyed it for ever. No prizes for guessing what the new power was. It was, of course, the railway engine.

But there had been stage-coaches for centuries, so why had things become vastly enjoyable all at once? The answer is simple. Before our period, the state of the roads had varied from vile to appalling.

Let us move forward from the 18th century to around 1800 to 1840. Before 1800, there had been precious little pleasure in travelling. “Rocky lanes, full of hugeous stones as big as one’s horse,” wrote one unfortunate about Welsh mountain roads in 1768, and there is no reason to suppose things were much less worse in England, Scotland or Ireland. Indeed our traveller, Arthur Young, said of a typical English road: “I know not, in the whole realm of language, terms sufficiently expressive to describe this infernal road.”

Early in the century, local parishes, not the county authorities, had been left to maintain the roads, and did not, so carts were liable to be trapped in mud or to have their wheels broken in ruts. Even the passing of many Road Acts and the setting up of toll-gates to extract money from travellers only improved things a little. Then two Scotsmen, Thomas Telford and John Macadam revolutionised road-building to such an extent that the London to Edinburgh journey shrank from 10 days in 1750 to 46 hours in 1830.

Instead of huge foundation stones, Macadam covered the earth with 10 inches (254 mm) of broken stones on top of which went a layer of smaller stones and sand. His “Macadamised” roads were bound by traffic and rain and they were higher in the centre to assist drainage. These new roads encouraged carriage-builders to produce better vehicles, properly sprung and comfortable.

The nobility and gentry promptly devised a sport as exciting as fox-hunting. This was driving one’s own “superb equipage” at breakneck speed from London to Brighton after taking lessons from professionals to learn the tricks of the trade. They travelled on other routes as well, but the London-Brighton one was their favourite, and large numbers of spectators cheered them as they sped by, the last word in elegance and dash.

Naturally, the passion for speed was bad luck on the horses, but at least the condition of the roads helped them. Only a few years earlier, England had been known as “a paradise for women, a purgatory for servants and a hell for horses”.

The coaching-inns were thrilling spots, instead of being merely picturesque as the survivors are today, for then their yards were alive with bustle and noise when coaches came or went. Of course, the people on top of the stage-coaches – up to 16 on occasion – were exposed to the elements, which is a polite way of saying that they often got soaked to the skin but there were few complaints in this golden age of stage-coach travel. There had been plenty earlier. And naturally the side roads were still as bad as ever. But everyone was trying to get themselves aboard a coach on a main road, so they had no time to waste on lamenting the low standard of the lanes of the land.

Then, at the very height of the coaching era, another even more sensational advance was made with the coming of the railways. Not even the first aeroplanes so captured people’s imaginations as those early trains did, and the reason is easy to understand. Since the dawn of mankind, the speed of human travel had been limited, first to how fast a man could run, then to how fast a horse could gallop. Yet almost overnight the situation was transformed. The Railway Age may be said to have begun when the great George Stephenson’s Locomotion opened the Stockton and Darlington Railway in 1825, and by the early 30s, Stephenson was able to reach a speed of a mile a minute. Today that may not seem all that fast, but then such a speed was incredible. No wonder the nation went “railway mad” and travelling by train became the biggest treat of all.

Of course, it was a bit of a shock to the system at first. Charles Greville, a politician, confided his feelings to his diary in July 1837, when he boarded a train at Birmingham. Apart from “the occasional whiffs of stinking air” he loved every minute of it after a “slight degree of nervousness and a feeling of being run away with” had passed. Queen Victoria set the seal on things when she made her first trip in 1842, after which even the most timid soul risked venturing by rail. It is worth noting that back in 1837, an engine driver had been sacked for daring to drive at 45 mph, even though far higher speeds were being achieved by the railway equivalents of test pilots.

Greville announced that railway travel rendered every other sort of travel irksome and tedious, and the great British Public agreed with him. Everyone wanted to go for a ride, every small boy wanted to be an engine driver, a happy state of affairs which lasted until the end of the age of steam. An actress named Fanny Kemble boarded her first train in 1830, with Stephenson, already a national hero, at the controls. She was “introduced to the little engine” a “snorting little animal, which I felt rather inclined to pat.” The lucky lady was actually allowed to ride “on the bench of the engine” with the hero as the train reached 10 mph on the famous, and just opened, Liverpool-Manchester Line. She was 21 at the time and was beside herself with joy, so we can imagine the feelings of children on their first rides.

Soon, Britain shrank in size, and villages and towns were no longer isolated from each other, for between 1830 and 1848 some 5,000 miles (approx. 8,000 km) of track were built. George Stephenson looked forward to a time when a worker could travel cheaply and, in 1845, Parliament compelled companies to run at least one cheap train daily. To the surprise of the companies’ directors, they were soon making fortunes out of these cheap trains.

Soon another phenomenon had begun to revolutionise Britain. It was not yet universally supported, but it was enjoyed by growing thousands, and was to be enjoyed by millions in the railway age. The phenomenon was the seaside holiday.