The monumental achievements of the Old Kingdom of Egypt 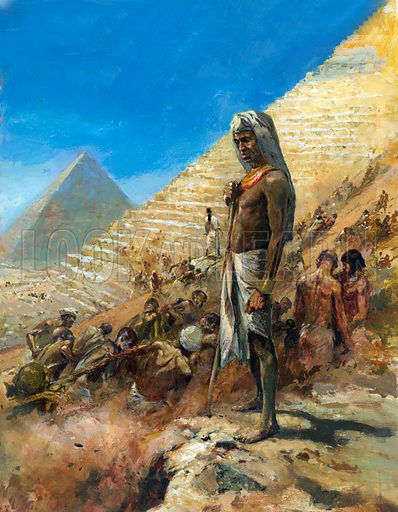 Building the Pyramids by Neville Dear

Uniquely among all ancient peoples, the Egyptians seemed to spend almost all the best years of their lives, and all their best efforts, too, in preparation for their deaths. In the case of a Pharaoh, thousands of men might begin to toil, even while the King was still a youth, to arrange the perfect resting place for the ruler’s body.

And of course, as we all know, the perfect place for a Pharaoh was thought to be inside millions of tons of masonry – preserved for all time in his pyramid.

Why should these clever and industrious people have been so consumed by the idea of death?

To answer this question we must understand two essential facts. The first was the sacredness of the Pharaoh, who was not only a ruler but a god. The Egyptians believed that the Pharaoh was actually the son of Re, the sun-god, and it has been suggested that the pyramid was copied from that made by the rays of the sun shining down through cloud.

The second fact is that the Egyptians believed that the royal ka, the vital force or spirit of man, could not survive unless his body was preserved and protected from violation; unless it was accompanied by his furniture, clothing, ornaments and other objects which were suitable to his rank; and unless offerings of food were made regularly in the funerary temple adjoining the pyramid. Such a temple can be seen near the pyramid of Cephren, near the Sphinx.

The first Pharaoh to build a stone pyramid was Djoser (2800 BC) at Sakkara. It was the first large stone monument in the world.

Djoser, in fact, is best remembered for his vizier, or chief counsellor, Imhotep, who was the architect of the Pharaoh’s pyramid. The vizier of the King had to be his architect, his builder, his engineer, his judge or lawyer, his scribe or writer and his secretary, so Imhotep probably never knew a dull moment.

The pyramid that Imhotep planned and directed for Djoser is today called a “terraced pyramid,” because it was built with zig-zag edges, like steps, and is not finished off as neatly as the later pyramids.

It took 70 days work by skilled preservers to prepare the Pharaoh’s body after his death in such a way that it would not deteriorate. They did the job so cleverly that the mummies, or preserved bodies, of the Egyptian kings and queens still show us very clearly what they looked like. We can even tell that some Pharaohs suffered from rheumatism, and others from toothache.

The burial customs were drawn-out and elaborate. There was even a “Book of the Dead” intended to direct the soul as to its conduct in the world to come and to give it charms to use in the event of it meeting danger.

But under all the ritual there was, of course, real human emotion. Today in Egypt, you can still see the pathetic remains of a dried-up bunch of flowers that were found in the tomb of the boy king Tutankhamen. They must have been thrown in upon the Pharaoh’s 18-year-old body at the last moment before the tomb was sealed – and who else would have thrown them, in that last gesture of love and affection, than the tragic King’s weeping wife?

If Djoser and Imhotep began the building of pyramids, it was Khufu (2900 BC) who built the largest of them. The Greeks called this Pharaoh Cheops, but Khufu was his real Egyptian name. Khufu was laid to rest in the Great Pyramid at Giza, near modern Cairo, a colossal monument that covers nearly 13 acres (approx. 5 hectares). It is 7,745 ft (approx. 2,359 metres) square at the base and was 481 ft (approx. 145 metres) high. Part of the top has since been removed, so that today it isn’t quite as high as it was.

For twenty years 100,000 workers toiled on this edifice, dragging great blocks of stone on rollers, then hauling them up ramps as the storeys rose. No other building in the world is so heavy and yet the stones are so beautifully fitted together that we can barely see where they are joined.

Historians now believe that Khufu changed engineers when the Great Pyramid was half-built, because the top half is not quite finished with the same perfection as is the bottom half. But still the greatest engineers of modern times marvel at the skill which is shown in the building of this mighty mass of stone, in days when there were no machines to do any of the work.

How were all those workers organised? The problem is, all this happened so long ago that very little is known about it. The pyramid builders may have been slaves, forced to do the work; on the other hand, they may have been Egyptians, as dedicated to building what they would have thought of as a religious monument, as were the English peasant Church-builders in the Middle Ages. We know that hostels of mud bricks were built to house them near the building site, and details of the food rations they received have been discovered.

As for the cost of their work in terms of food production, we know that in the flood season, the Nile waters covered the farmland for three months, a period in which no work could be done at all. If these three months were the period of maximum work for the pyramid builders, perhaps advantage was also taken of that same flood water to bring the pyramid stone down-river by boat from distant Aswan, where it was quarried, to the pyramid site.

But if the 2,300,000 stone blocks of Khufu’s Great Pyramid are an awesome work of wonder to gaze upon, it is perhaps an even more inspiring experience to step inside and walk through its sloping, dimly-lit corridors – a place where the Pharaoh, the most powerful man in the world 5,000 years ago, intended that no human being should ever walk.

Although a heavy curse was laid by the temple priests upon anyone who should disturb a dead man’s grave, the ancient Pharaohs knew all about tomb robbers. They tried to defeat the robbers by building pits at the end of “dummy corridors” within the pyramids, in the hope that the plunderers would tumble into these deep traps from which there was no escape. How many ancient thieves died in this grisly way we shall never know, but you can still see these death pits in the pyramids and your heart can still miss a beat as you look down at where one false step could lead you.

The modern entrance to Khufu’s pyramid is a little way up one side and as soon as you are inside, you have to crouch and bend as you go up a narrow slope. Suddenly the roof’s height increases and you can walk upright, still going uphill and, because of the artificial light, with no sense of being almost within the heart of this massive structure. Then you have to stoop again, passing the slots of doors in a passage that led to the King’s body. And then you may straighten up, for you have come to that holy of holies – the room where Khufu’s body lay.

The silence, of course, is utterly complete, and so, unfortunately is the emptiness, for only the huge empty granite coffin remains to remind us of the Pharaoh’s last resting place. All the rest is gone, and we know from the treasures of Tutankhamun’s tomb what a rich booty the ancient thieves must have discovered piled up in this soundless chamber, 34 ft (10 metres) long by 17 ft (5 metres) and 19 ft (5 metres) high.

After Khufu died and his body was transported to this “House of Eternity”, it is believed that the next Pharaoh was his brother Chephren, who built the second great pyramid at Giza, next to Khufu’s. His temple, at one end of the causeway leading to his pyramid, where his body was mummified and lay in state, is still in an excellent state of preservation. You can wander from room to room and imagine all the chemicals and oils that must have been kept there during the seventy days in which the royal chemists worked on preserving their dead master’s corpse.

Not far from the temple is the huge Sphinx, perhaps the best known sculpture in the world, staring out placidly across the desert just as Caesar, Cleopatra and Napoleon saw him down through all the ages that followed the downfall of the Pharaohs’ empire. The Sphinx, like everything else in this area of colossal monuments, is worth another look, for that face is the face of the Pharaoh Chephren himself, carved out nearly 5,000 years ago during his reign to remind everyone that their ruler was one with the gods.

The third pyramid at Giza is the smallest of the trio and was built by Menkaura. He is a Pharaoh about whom very little is known, except that he reigned for a much shorter period than did either Khufu or Chephren.

Usually the Pharaoh ruled through right of inheritance, though occasionally by conquest. A man could also become a Pharaoh by marrying the heiress of the previous king. However, the royal families safeguarded themselves from outside interlopers by marrying within the family – thus, cousins married cousins and sometimes brothers married sisters.

Besides his “Chief Wife,” the Queen, a Pharaoh would also have a number of lesser wives, called concubines, by whom he had numerous children. When these in turn married, there might be hundreds of royal grandchildren.

These, with the nobility, would have made a powerful hierarchy. But it is interesting that despite all their personal grandeur, the Pharaohs and their nobles never lived in stone dwellings. Their palaces and luxurious villas have long since vanished, because they were built of mud bricks and timber. But we know what these buildings were like from their foundations, and from paintings in tombs.

All these Pharaohs we have mentioned belonged to the period known as the Old Kingdom which lasted from about 3200 to 2400 BC. Among the later rulers of the period were Mernere and his half-brother, Pepi II. Pepi is interesting because he was king for 94 years, the longest reign in the history of any country.

These two Pharaohs were the first to mount explorations into other countries, and their explorers brought back heaps of treasures for them. When one of the explorers named Harkhuf wrote to the Pharaoh to tell him that he was bringing back an African pygmy, Pepi II wrote back: “My majesty desires to see this dwarf more than the gifts of Sinai and of Punt.” There was much more in the Pharaoh’s letter, and it pleased the explorer Harkhuf so much that he had it inscribed on his tomb on the island of Elephantine, near the first cataract of the Nile.

About 2400 BC the Old Kingdom fell into decay and Egypt again became a series of separate districts sprawled along the Nile. When it was next reunited, a new and glorious age of civilization was born.