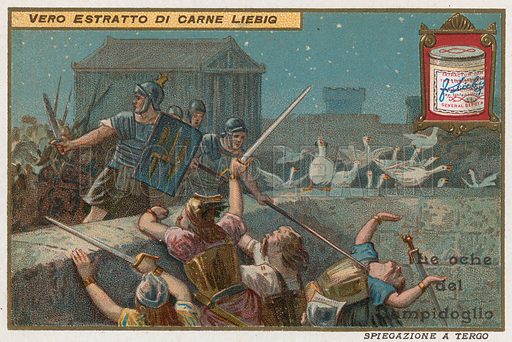 “The Gauls are coming. Prepare to defend the city,” gasped the exhausted and dust covered messenger as he ran through the gates of Rome. “We’re not afraid of a few foreigners,” scoffed the military leader. “Call out the guard. We’ll give those Gauls a taste of Roman steel that they’ll not forget in a hurry.” Their shields and armour glinting brightly in the hot Italian sunshine, the legionaires of the highly-trained Roman army, renowned for its bravery and efficiency, marched out of the garrison and formed themselves into a human barrier outside the city.

When the Gauls arrived the Romans were visibly shocked. These barbarians from Western Europe were much taller than the average Roman warrior, they fought with strange and unknown weapons, and as they marched they shouted furiously in a strange and frightening language. As the foreign horde appeared over the brow of a hill in front of the city, the colour rapidly drained from the faces of the Roman soldiers.

Suddenly the Gauls charged, sweeping down on the quaking legionaires, and shouting loud battle cries. This was just too much for the already scared Romans. Shields and swords were dropped hastily on the battlefield and the Romans fled for their lives.

Many of the Romans were killed by the enraged Gauls and many more were drowned as they tried to swim the River Tiber in their efforts to get back into the city. Most of them never reached the other bank for their armour was too heavy and it dragged them down to the bottom. Those that did manage to reach Rome safely were so concerned with their flight that they did not even bother to shut the gates behind them. Luckily, this act of cowardice helped to save the day for the Romans. “It must be a trick,” reasoned the Gallic leaders. “The Romans are famed for their skill in battle and they would not run in fear. It must be part of a plan to ambush us in the city.” And so the Gauls decided not to enter Rome but set up camp beyond the city walls. What they did not know was that the Roman retreat was caused by sheer cowardice.

Meanwhile the Romans, some of their courage returning, were debating how they could best defend the city when the Gauls eventually mounted their attack. The women, children, and old people were ordered out of Rome and into the outlying districts where they would be safe. All the soldiers and able-bodied men moved to the Capitol, one of the seven hills of Rome with as much food and drink as they could carry, determined to withstand any attack or siege as best they could. In the Capitol, a strong fortress positioned at the summit of a steep hill, they were confident that they would be safe.

Two days later the Gauls, having overcome their fear that the gates had been left open deliberately, marched into the city. They burned and looted the city before turning their attention to the Capitol. They charged up the steep hill, holding their shields over their heads for protection, but the Romans fought them off bravely and the foreigners were forced to retreat back into the smouldering ruins of the city. On subsequent days the Gauls attempted other attacks but the Romans had picked their defensive position well and the Capitol proved to be impregnable.

All was not, however, well with the besieged Romans. Water was scarce and their food supplies were dwindling fast. Some of the men were beginning to complain bitterly about the fact that the sacred geese were better fed than they were. But the majority continued to give a portion of their much-needed food ration to the birds for, according to tradition, they were the property of the goddess Juno, wife of Jupiter, queen of Heaven, and goddess of war.

One night a Roman messenger stole through the Gallic forces and climbed up to the Capitol by a secret route. The Gauls saw and heard nothing of his coming and going but the following morning one of them found tracks and scratches down the cliff that clearly indicated a way to gain entrance to the Capitol. That night the Gauls crept silently up the cliff path to attack the unsuspecting Romans. Not a word was spoken, not a sound was made, as they crept closer and closer to the wall of the fortress. When they reached their objective some of them formed a human pyramid in order that their colleagues could climb up and enter the building.

The Roman guards heard not a sound. The dogs never stirred from their slumbers. But, as the first Gauls climbed over a balcony and into the Capitol, the geese started honking loudly and flapping their wings frantically as the man came into view. Their cackling aroused Marcus Manlius who was on guard nearby. As soon as he realised what was happening he sprang into action. “Call out the guards”, he yelled. “We’re being attacked.” He rushed across to the bemused Gaul who was completely bewildered by the furore that he had inadvertently set into motion. In one single thrust, Marcus lifted up the soldier and tipped him over the balcony on to the rocks below.

As the rest of the Gauls swarmed over the wall the Roman soldiers were ready for them. Sword clashed with sword in the ensuing struggle but one by one the invaders were repelled and forced back over the wall and rolled down the cliff face. Eventually, the Gauls realised that they would never take the Capitol no matter what their tactics were, and they withdrew their forces. The Romans were able to return and rebuild their beloved city which would eventually become the capital of the then civilised world but they never forgot their debt to the sacred geese. Each year in commemoration of the event they mounted a magnificent procession at the head of which was carried a golden goose in memory of the birds that in 390 BC had saved Rome from defeat.