This edited article about the Second World War originally appeared in Look and Learn issue number 712 published on 6 September 1975. 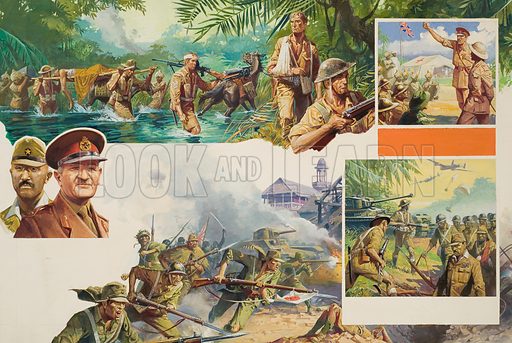 “If we are going to survive we’ll need more supplies,” remarked Petty Officer George White as he waded into the sea. “I’ll see what I can salvage from the wreck.” The bedraggled and wounded survivors watched in silence as he swam through the shark infested waters to the wreck of HMS Grasshopper that had just been bombed by Japanese planes in the Second World War. Many of the survivors were civilians who, ordered by the British to evacuate bomb-torn Singapore, were on their way to Java when the planes attacked, Now they were marooned on an isolated beach in the South China Sea.

Once he had boarded the wreck, George White built a raft and started loading it up with all the food he could find. As he was scrambling about below decks, he suddenly heard a ghostly moan. It came from lockers that he could just see in the half light. He put his hand down behind them and touched warm, wet fur. And then a cold, wet nose nuzzled into his palm.

“Judy! It’s you!” he exclaimed, as he pulled the dog, the gunboat’s pointer mascot, out from her imprisonment and loaded her on to the raft together with the other items he had salvaged.

It was to be another five days before the group was rescued and, had it not been for Judy, they might not have survived that long. Their sparse supply of fresh water was almost depleted. Judy sensed this need and each time the men asked her to search she ran down the beach barking excitedly. Eventually one of the sailors became so intrigued by her curious behaviour that he dug a hole where Judy was scratching in the sand. As the hole deepened it began to fill up with water – fresh water.

Their rescuers took them to the nearby island of Singkep, where they got a junk to take them to Pedang in Sumatra, hoping that they could get a boat to Ceylon (now Sri Lanka). Unfortunately they landed on the wrong side of Sumatra and two hundred miles (320 kilometres) of dense, humid jungle lay between them and Pedang. There was only one thing to do. With Judy in the lead, and the badly injured survivors carried on stretchers, they began walking. The day after their arrival, Pedang surrendered to the Japanese. The survivors of HMS Grasshopper were now prisoners of war.

The Japanese divided the men into four national groups for imprisonment. Judy remained with the British party, but as food was extremely scarce she had to spend a great deal of her time in hiding, for the guards would have had no qualms about putting a dog into their cooking pot. Whilst in hiding, she spent her time in the jungle catching lizards, birds, and other small creatures which, when darkness fell, she took to the British contingent where they were gratefully received by the half-starved prisoners.

Some of the men were then transferred to Medan in the north of the island. Les Serle of the 18th Division smuggled Judy aboard the train that carried them across to the other side of Sumatra. At Medan she made friends with Frank Williams, an RAF technician.

One day, much to everyone’s surprise, Judy was discovered to be pregnant. She had nine puppies of which only four survived. One of the pups was given by Frank Williams to the camp commandant who made Judy an official P.O.W. She could now appear openly before the guards without fear of being shot.

Shortly afterwards, it was announced that the prisoners were to be shipped to Singapore but Judy had to stay at Medan. “After all we’ve been through they’ll not part us that easily,” muttered Frank.

The following day the men were ordered to march out. Over 700 men moved off towards the local railway sidings. Frank tied Judy to a stake in the middle of the compound but he made sure that the knots would slip when pulled. He ordered the dog to stay and then joined the rear of the column.

As soon as he was outside, he gave a shrill whistle, hoping that Judy would hear it and dash into the jungle. He need not have worried. When he reached the train, she was already hiding beneath the trucks waiting for his next signal. Now came the crucial test of the trick they had practised the day before. He flicked his fingers and the dog responded immediately. She bounded from beneath the train and darted into the sack containing Frank’s belongings.

When they arrived at the port of Belawan they were inspected and counted on the dockside before embarkation. Whilst this was taking place, Judy hid under the train until Frank flicked his fingers and she scuttled back into the safety of his sack to be taken aboard the rusty tramp steamer that was to take them to Singapore. But the vessel never reached its destination.

It was torpedoed and 500 of the 700 prisoners went down with it. As the ship floundered Frank managed to push Judy through a porthole before he himself clambered from the wreck.

Eventually he was picked up by a Japanese tanker. There were some other prisoners on board but of Judy there was no sign. Sadly he resigned himself to the fact that she had drowned.

When he reached the new prison camp he was hurled into the compound by the guards. He lay there until something jumped playfully on to his back and nuzzled his face. It was Judy!

Les Serle had kept her hidden during their journey to the camp. From that moment Frank and Judy were never parted. They were sent to another prison camp on Sumatra; they endured unspeakable hardships; and when the end of the war came Judy had to be smuggled to England. But both man and dog were determined to stay together through thick and thin.

Only Judy’s death, on 17th February, 1950, broke the partnership that war, imprisonment, and starvation had been unable to sever. On her grave in Africa, where he was working at the time, Frank Williams affixed a metal plaque detailing her adventures in memory of “a gallant girl, a wonderful dog who with wagging tail gave more affection than she ever received.”