England’s mastery of the longbow won many famous battles

This edited article about the longbow originally appeared in Look and Learn issue number 674 published on 14 December 1974. 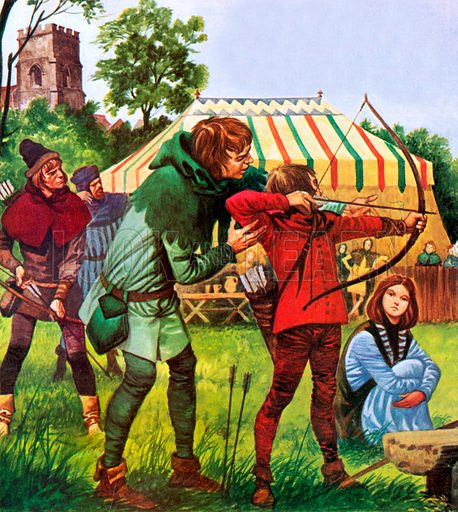 A boy being taught to use the longbow, by Peter Jackson

The last thing that the exhausted Genoese crossbowmen wanted was a fight. Italian mercenaries in the service of Philip II of France, the 7,000 strong band had endured an 18 mile march, laden down by their heavy bows and short, heavy arrows known as bolts.

With the rest of the French army, over 30,000 strong, they had reached a spot near the town of Crecy, and in front of them, as they stared into the setting sun, they could see a small English army of about 11,000, motionless on a hill.

Behind the English on the gentle slope was Crecy, on their left was a river and on the right was a wood, a fine defensive position. The order came for the Genoese to begin the task of destroying them, and they wearily started to move forward through the ranks of mounted and dismounted French men-at-arms. They needed to get to within 100 yards to fire their accurate but slow and difficult-to-load bows, though they tried an earlier volley, which failed to move the English.

Suddenly, the longbowmen of England, over 6,000 of them, advanced a single step and, using the full strength of their bodies, arched their great six-foot bows and drew the strings back to their ears. Then, as the medieval historian Froissart wrote, they “shot their arrows with such force and quickness that it seemed as if it snowed.”

The arrows annihilated the crossbowmen, and as a longbowman could fire a steel- or iron-tipped arrow every five seconds, the cloud of missiles was indeed like a death-carrying snowstorm. It was one of the great turning points in the history of war, for at a range of 250 yards the English arrow storm was not matched in destructiveness by infantrymen until the American Civil War in the 1860s.

Before returning to the battlefield which was to see the destruction of the flower of French chivalry hard on the massacre of the archers, we must examine how the wonder weapon came about, and why the English, not the French possessed it.

Bows are almost as old as the human race, but the longbow (long-bow or long bow) is far younger. The English found the Welsh using it in the 12th century, but bows almost as long may have been introduced into England by the Danes before the Norman Conquest of 1066.

Proof of the fire power of the longbow came at the Battle of Falkirk in 1298, when Edward I’s Welsh archers broke the hitherto impregnable circles of Scottish spearmen with their arrows. Less than 50 years later Europe was to discover the terrible weapon.

It needed endless practice to use a longbow. While other archers drew the bow string back with the strength of their arm, longbowmen, as has been noted, pressed forward with the full strength of their bodies to arch or bend their bows. Children had small bows which were changed for larger ones as they grew, “for men shall never shoot well unless they be brought up to it.” While French peasants were forbidden to bear arms, in England and Wales peasants had to train to shoot the longbow by the law of the land.

So important was archery considered that in the 14th century laws were actually passed to stop villagers playing dice, handball, football and other games because these sports took their minds off the all-important archery practice. Earlier, in Edward I’s reign, all able-bodied men aged from seven onwards had to train every Sunday and on each Holy Day, though this law was later amended to everyone between 17 and 60. Not that anyone seems to have minded. England and Wales, as the Robin Hood tales suggest, were archery mad.

The bows were of elm or ash or hickory, but mainly of yew, and they had a range of some 400 yards. The arrows could go through chain mail, and even the strongest plate armour at short range. And, of course, they never jammed, though crossbows frequently did. Heaven help men-at-arms who dared to open their visors on hot days, for a volley of arrows was the result, and charging horsemen lost first their steeds and were then often brought down themselves.

Archers were professional soldiers and well paid. Some went to war mounted – Edward III had a bodyguard of 200 mounted archers from Cheshire – but they fought on foot for accuracy, as U.S. Cavalrymen later did on the American plains against the Indians, except in emergencies.

Edward III started what was to become the Hundred Years’ War by claiming the throne of France through his mother, and to back his claim he organised an army not of nobles and unskilled militia forced by law to serve, but of highly professional fighting men of all classes.

The French, with their armoured knights and men-at-arms, their hired archers and despised foot soldiers, had no idea that a new type of army was on its way to challenge them.

The first campaign began in 1340 with a big naval victory for Edward, but in the military action that followed, the secret weapon of the longbow was not widely used. Then, in 1346, a strong army of cavalry, dismounted men-at-arms and longbowmen set out for France. Edward chose good officers and knew how to inspire his men to give of their best, and the supply problem, a nightmare in those days, was well handled. The plan was to capture town after town and seize as much plunder as possible in an effort to force the French to fight.

King Philip may have wished to avoid a direct confrontation, but not so his fire-eating commanders, who were only too eager to wipe out the small English army. So the Battle of Crecy in north-west France took place.

After that first terrible arrow storm, the surviving Genoese fled back the way they had come to the fury of the French mounted men-at-arms. Instead of waiting for orders, the French horsemen rode straight through the crossbowmen, trampling the screaming archers down. Now the sun had set and the longbowmen could not see their target perfectly. But they could see enough and loosed another cloud of arrows, which killed the great warhorses and pierced their riders’ mail. More horsemen rode into range of the longbowmen until the whole field was carpeted with dead and dying warriors in their splendid war-garments.

Some French men-at-arms reached the English and fierce hand-to-hand fighting ensued. At one point Prince Edward, later known as the Black Prince, was in danger, but his father sent no men to help him. “Let the boy win his spurs,” said the King, meaning win a knighthood, which the young Prince did.

Through the night the French continued charging against Englishmen now protected by mounds of dead enemies. Daylight saw an appalling scene. Well over 1,500 nobles perished and uncounted other Frenchmen, the King escaping with five barons from the stricken field. Only a handful of English lay dead and this stupendous victory had been due almost entirely to the longbowmen who were to triumph again at Poitiers, Agincourt and other bloody fields.

Why did the French not learn the art? Because it took years, generations even, of practice, which is what had happened in England, Wales and Scotland. As late as Elizabethan times the regular practice went on, but by then firearms had come to stay. Far less accurate than the longbow, fired by enough men they could do more damage and so the day of the great bow was over. It had served England well and brought a new class of man onto the battlefields of Europe, an ordinary man, except in his skill and strength, well-paid, loyal, up to every old soldier’s trick, and brave as a lion, the ancestor of countless British Regulars down the centuries.