The architecture of decorous seduction – how bower-birds woo their mate

This edited article about birds originally appeared in Look and Learn issue number 653 published on 20 July 1974. 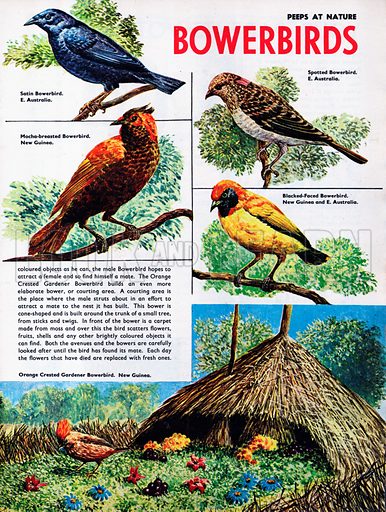 There are several species of bower-birds all found only in Australia and New Guinea. Only the males build bowers and each species builds a different kind of bower.

One of the largest and most elaborate bowers is made by the Crestless Gardener bower-bird. The male starts by building a pyramid of sticks around the base of a small tree and then constructs a tent-like roof over this. The area in front of this is enclosed by a fence made of twigs and small sticks. Finally, mosses are collected and planted in this space and a whole area is decorated with flower heads of many different colours. The object of this extraordinary and rather beautiful display is to attract a female and is part of the courtship display between the two birds.

Bower-birds nesting in the neighbourhood of villages or farms have taken to using buttons, matchboxes, milk bottle tops and similar objects to decorate their bowers. One kind of bower-bird uses the juices of coloured berries to “paint” the walls of its bower.

Although the hen bird takes no part in building the bower, it is she who builds the nest, incubates the one to three eggs she lays, and feeds the young without any help from her mate.