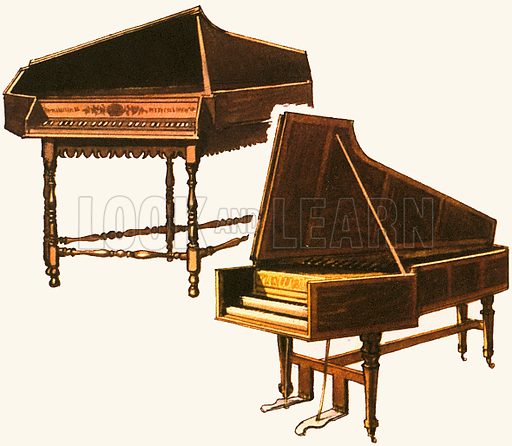 All these instruments have keyboards like that of a piano, but there is a fundamental difference. The tone of the piano is produced by striking its strings by means of hammers, but in the harpsichord family the strings are plucked by crows’ quills attached to small pieces of wood called ‘jacks’.

The harpsichord is usually shaped like a grand piano and has sometimes two or even three keyboards. There are two or more strings to each key and the number of strings that are plucked is controlled by hand stops or pedals.

The harpsichord was the most important of the stringed instruments before the invention of the piano, and was used extensively for solo and chamber music.

The first methods of applying a keyboard to the harp were introduced during the Middle Ages, and in the 16th century ‘a pair of virginals’ was a popular instrument, played by Henry VIII, Elizabeth I, and Mary, Queen of Scots. When it was closed, the instrument looked like an oblong box and was either put on a table or on a special stand.

The spinet is a triangular or wing-shaped instrument and has one string to each note. Spinets were made in England during the 17th and 18th centuries and are sometimes used today when music composed during those periods is played.