William the Conqueror – unwelcome invader or the Confessor’s appointed heir?

This edited article about the Norman Conquest originally appeared in Look and Learn issue number 622 published on 15 December 1973. 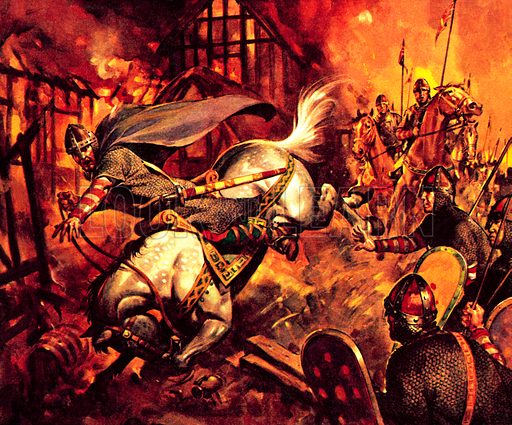 A burning timber, a rearing horse. This seemingly trivial combination led to the death of William the Conqueror, a king who, by today’s standards, was cruel and merciless. Yet 900 years ago his harsh discipline and drive were, perhaps, just the qualities which England and her peoples needed to set them on the path to power and prosperity.

The grim-faced Conqueror rode through the blackened streets of Mantes. His Norman troops had attacked the French town on the Seine not far from Paris and had taken and sacked it. Now it was a smouldering ruin and corpses were littered in the streets.

William of Normandy, conqueror of England, was now 59. Though he was still a great soldier, he had become fat, so fat that riding in chain mail was now getting very difficult for him.

Suddenly, a blazing timber fell in front of his war horse which reared up in fright. William’s great bulk was hurled against the iron pommel of the saddle. Something inside his stomach was hurt and he collapsed, a dying man.

Yet it took him over three weeks to die, and when he did so his lords raced away to claim their possessions and his servants plundered all his belongings. If an obscure knight had not felt it his duty to save his sovereign even in death, his body might have been left to rot. As it was, the knight took it to Caen in Normandy, where it was buried. It was a poor end for the king who, despite his harshness, was a great ruler and one who changed the course of history.

What can William have thought about during his lingering agony? Did he recall how he, the illegitimate son of Count Richard II of Normandy and a tanner’s pretty daughter, had grown up in an atmosphere of bloodshed and treachery, how he had been lucky to live to manhood after becoming ruler of Normandy at the age of eight? His dying father had made the fierce Norman nobles swear fealty to him, but many were to break their oath. Eleventh century Normandy was no place for boy rulers.

Yet the boy survived and grew up to be a great warrior, renowned for his conquests and his cruelty, for his seizure of the throne of England, for the crushing of Yorkshire and the North, and for the terrible mutilations of those who dared to break his savage forest laws. And now he had barbarically destroyed Mantes, perhaps to show the French king what would happen to Paris if he did get his way. He repented his sins on his deathbed and made his peace with God. He had committed great crimes, but had they been worse than other leaders had perpetrated? Was he really an evil man, or did he sometimes act ferociously when nothing else was left to him. Let it be stressed at once that the standards of 900 years ago were not ours.

The Normans were the grandchildren of wild Viking raiders who had settled in Normandy. (Norman means “northman,” for the Vikings came from Scandinavia.) They liked trading and engaging in legal battles, though few of them could read, but only two things really mattered to them, fighting and hunting. They were a wild bunch, but William knew how to govern them. He was a law-and-order man, and heaven help those who challenged him if he was in a black mood and felt that he should make an example of them.

But much as he loved fighting, he usually spared cities and rulers who gave in before a fight, and in an age when rebels and troublemakers were usually put to death, he preferred mutilation. This could be a hand, or hands, feet and even blinding. Mutilation could even take place for daring to kill a deer in a Royal Forest when all the offender wanted was to save himself from starvation. It was indeed a savage world, yet William was known to spare his enemies on occasion; he was a good husband; and, in an age of drunkenness and gluttony, he lived simply, his fatness being a disease.

But England? How could its conquest be justified? The English, longhaired and effeminate, according to the short-haired Normans, were one of the wealthiest nations in Europe, so wealthy that for years they had had to fight off Danish (Viking) plunderers. By the 11th century the north of England was actually peopled by Anglo-Danes, for the invaders had sometimes had the upper hand, Canute had been king of the English, Danes and Norwegians, and Harold, last of the English kings, had a Danish mother.

He became king in 1066 when Edward the Confessor died, being nominated by the dying man, despite very little royal blood in his veins. William had other ideas, for the good reason that back in 1051 Edward, his cousin, promised him the Crown. Edward had strong links with Normandy, Harold with the Danes.

To complicate matters, Harold, probably in 1064, had fallen into William’s hands while on a mission to France and sworn allegiance – probably because he had to – to him! Harold later forgot the oath, but William did not. In 1066, England seemed to him like a ripe plum, ready for plucking, and he even felt he had right on his side.

England had been at peace for most of the century, yet William’s invasion plans were fraught with danger. To cross the Channel was difficult enough for an army, and the Normans had to ship their horses over, for it was as cavalrymen that they had made themselves such masters of war. Also, William had to leave enough men behind to protect Normandy from enemies without or within. It was a daring gamble which nearly failed.

He embarked for England on September 27th with a pack of adventurers, a third of them Normans and many of them mercenaries. Fortunately for him, Harold was busy in the north beating off an army of rebels and Danes, but the English king marched rapidly south to throw William and his men into the sea.

The two armies met at Senlac near Hastings. There may have been as few as 7,000 on each side for one of the key battles in world history, William’s men being basically cavalry assisted by archers while Harold relied on infantry and his famous axe-men who formed a shield wall that could be invincible.

At first the day belonged to Harold, but though William’s cavalry could not pierce it, his archers did. There was a moment when the English could have charged and won; but they did not, and finally they were defeated with Harold dying, as legend has it, when an arrow pierced his eye.

Though haphazard resistance was to continue until 1071, England collapsed like a card castle to William after his great victory. The very poor suffered little change, except those who were turned off their lands to make way for royal forests, for they simply got new overlords. But generally it was the landowners great and small who suffered most, for the Normans indulged in one of the classic land grabs of all time. William had to reward his supporters and that is how he did it.

Around England castles arose, racial tension flared and Normans viewed the more cultured English with suspicion. French ideas, the French language and Norman military might were in the ascendant, while the Anglo-Saxon people of England paid huge taxes and sweated for their conquerors. Yet there were as many just Norman overlords as unjust, men of honour as well as monsters, and William’s new kingdom soon became a peaceful, if hardly happy place.

In the long run, the coming of the Normans benefited England greatly. She became part of western Europe, not a fringe of Scandinavia. Norman energy gave the pleasanter Anglo-Saxon way of life the shot in the arm which was to make England, then Britain, a very great nation. William, though no hero to those he conquered, was an extraordinary man, certainly more admirable than most of his contemporary rulers. Later generations of Englishmen can be glad he came.