Liberty with responsibility – the hard-won freedom of the press

This edited article about newspapers originally appeared in Look and Learn issue number 622 published on 15 December 1973. 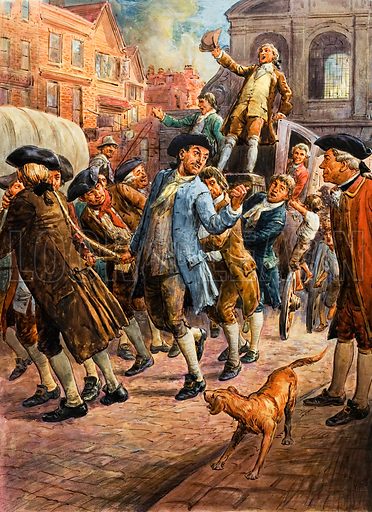 John Wilkes is freed after being wrongfy arrested for libel following his editorial in the North Briton criticising the government and the King, by C L Doughty

Daniel Jones, the Editor of The “Daily Journal” had been working late. His pen scratched noisily as he hurriedly finished the article which, a day or two later was to cause scandalous voices to be raised in Parliament and excited chatter to be aroused wherever else his paper was read. Snuffing the candle carefully he left the untidy litter of papers on his desk, donned his cloak as protection against the cold night air, secured the door to his office and slipped quietly into the blackness of Fleet Street.

The occasional flares at the corners of alleyways did little more than provide small pools of orange light as he made his way through the warren of streets and passages towards Moorgate. Taverns were havens of light and noise but these he seemed to want to avoid as he walked silently but watchfully home. For these were dangerous days when the power of the press was beginning to be feared by politicians. Editors could be thrown into gaol or fined at the slightest excuse. All sorts of tactics had been tried to silence their troublesome voices but still men like Daniel Jones wielded their pens more effectively than swords.

The attack was well planned and brutal. In the middle of the 18th century cries for help were rarely heeded late at night when the footpads held sway and the Bow Street Runners were seldom seen. Daniel Jones put up a brief but hectic resistance, then fell in a flurry of kicks and blows which rained in on him until he lay quite still. It would be weeks before he could return to his paper and by then one more scandal could be forgotten in the daily tide of news. In a world as dangerous and exciting as that of the early newspapers it was an incident that friends and enemies alike would soon forget.

It was a chaotic world in which newspapers often had short but eventful lives. Printing presses were moved secretly at night, spies retained to keep a watchful eye on other papers and Government officials, and papers often sold illicitly to avoid the crippling stamp tax.

Yet the growth of newspapers had been a long, slow, unhurried process. Perhaps the first daily paper as such was a Roman invention. Called the “Acta Diurna” it looked like a giant poster and copies were placed in the Forum and other places so that all might read of battles, festivals, government announcements and other news from the Empire.

In following centuries, news came to be delivered more by way of mouth. Bell men, town criers, ballad singers and ordinary travellers could be sure of a ready audience and it was not until the seventeenth century that newsletters, the forerunners of our daily papers, really became established. At that time, St. Paul’s was a centre of daily life and gossip. Eager young men stood with notebooks in hand, always ready to note down rumours, scandal and tit-bits of news for their columns. Politicians and merchants were always ready with items for the newsletters and soon the notebook would be filled.

A quick walk down Ludgate Hill to the taverns of Fleet Street would bring the journalist to his “office.” There he would dictate his news to a dozen or so scriveners, or writers, who busily copied, by hand on to a folded sheet of paper. Dozens of copies were made and either delivered in London or sent with the mail coaches to the provinces.

Despite the small number of people who could read, the demand for news was growing rapidly and it soon became clear that handwritten newsletters were not enough. Every Coffee House liked to boast of a good supply of papers and pamphlets while the ladies expected someone to read aloud to them over their evening teacups. The hunger for news spread far outside London and now at last there were people who would try and meet the demand.

Britain’s first daily newspaper to survive more than four issues was the “Daily Courant” which appeared in March 1702. Although the first issue was only 104 lines of translations from French and Dutch papers it eventually grew to six pages and lived for over six thousand issues. Like most of its competitors, the early battles were against the censor, so that they might keep the independence which ensured that their voice was heard.

Many of the early reporters and editors suffered as much as Daniel Jones. Defoe spent long months in Newgate Gaol and three days in the pillory; John Wilkes, after a sensational issue of the “North Briton” had an even more chequered career. He was expelled from Parliament, outlawed, exiled in France, and imprisoned before he turned the tables on his opponents. He was eventually elected Lord Mayor of London and brought to his political meetings the same wit and excitement that his writings gave to newspapers.

At one election meeting a citizen, in a frenzy of rage, shouted that he would rather vote for the Devil than Wilkes. Wilkes instantly turned on him and asked, “And if your friend is not standing?”

There were other brilliant men who made their name in these early newspapers and one such was Jonathan Swift who wrote for the chief Tory journal, the “Examiner” and who also began to give authority to the leading article of the newspaper, which comments on the news. His biting satire and often cruel humour made him more enemies than friends and, like so many of his contemporaries, his career was a series of astonishing ups and downs. At one time, returning to his native Ireland, this strange and contradictory clergyman was met by an angry Dublin mob. Yet later he was called “the uncrowned king of Ireland,” followed by admiring crowds, showered with gifts and with bonfires lit in his honour.

No paper, however, has ever enjoyed so much power and prestige as “The Times.” It was begun by John Walter on January 1st 1785, and was originally called the “Daily Universal Register” before changing its name three years later. It started by promising its readers “not to wound anyone’s delicacy or corrupt the mind and to abstain from scandal,” but despite this John Walter soon ran into trouble.

He was “gagged” by restrictions on free speech, fined and imprisoned just like his less successful competitors, for criticism of royalty was always sternly punished. But “The Times” still raced away from its competitors and when, at the turn of the century, it achieved a daily circulation of 5,000 copies it was twice as popular as its nearest rival and remained so.

For twopence or threepence a four or six page newspaper provided plenty of interest. News from home and abroad and debates in Parliament took pride of place but every part of the newspaper was devoured with interest. Court reports could be sandwiched between advertisements for Greenhough’s Toothache Tincture and stagecoach rates. An early cricket report spoke of “the gentlemen of Theale beating those of Reading in a most superior manner” and everywhere strange and marvellous remedies for gout, scurvy and rheumatism were displayed to an unwary public.

Masters often advertised for servants and those who wanted places found them in the same way. A footman once advertised “A likely sober person has a mind to serve a Gentleman as a valet or butler. He is known to shave well and can make wigs. He well understands the practice of Surgery which may be of great use to a Family in the country . . . he understands Hunting, Shooting and Fishing.” The style may have changed but the purpose remains the same.

The power of the Press was growing for all to see, despite the heavy taxes and the perils of offending those in power. They were essential reading both in the coffee houses of London and the quiet villages of the country, even though bad roads and other hazards meant their distribution was erratic. By the 1770s fresh newspapers were starting up at the rate of one a month and the “Public Advertiser” had achieved a circulation of 80,000 copies. There would be bitter battles – even murder – before their position was secure but they were changing our way of life in a way that few could foresee.

Less than two centuries earlier, King James had been crowned before many of his subjects realised that Queen Elizabeth had died six months earlier! Now everyone felt they had the right to be informed and the search for news had started.