The Roman Empire blossoms into the glorious Augustan Age 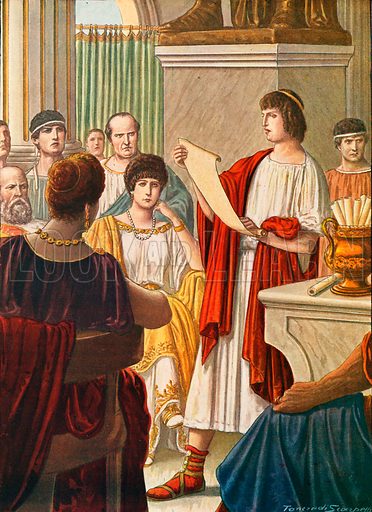 When Julius Caesar lay on the floor of the Roman Senate bleeding to death from the dagger blows of his assassins, a tall pale youth of 18 was working quietly at his studies in Illyricum, a town which lay across the Adriatic Sea. As soon as he heard of Caesar’s death the youth packed his books and, grim-faced, set out for Rome.

Gaius Octavianus, whom we call Octavian, was going to the great city to claim his inheritance – the leadership of the Roman world. For as Julius Caesar’s adopted son and heir, the mantle of the dictator had been left to him in Caesar’s will.

With Rome still ringing with the mayhem of political murder and intrigue, with plots and conspiracies, and with her people teetering again on the brink of civil war, it seems inconceivable that a boy of 18 with no political experience should even dare to make such a grandiose claim. But Octavian not only made his claim – he won it. And he became one of the greatest leaders of the ancient world.

In Rome the two ringleaders of the murderers, Brutus and Cassius, suddenly discovered that they had misjudged the mood of the people. The Romans did not want Caesar dead. In fact, they wrung their hands and wept openly.

Marcus Antonius, or Mark Antony, as we call him, noted their grief and played upon it grimly. He had been Caesar’s best friend and helper and as he read the dead dictator’s will he played deliberately upon the emotions of the plebeian mob.

Tears welled in Antony’s eyes as he told them that their beloved leader had left part of his lands to be shared among them. In a frenzy of grief the plebeians turned upon the conspirators – and Brutus and Cassius were obliged to flee hurriedly to the East.

Antony had as his chief supporter Lepidus, who had been Caesar’s Master of Horse. They had between them the only army in Rome, while Brutus and Cassius swiftly raised an army in the East. One of these four then, it seemed certain, would emerge as the new leader of Rome.

Then it was that young Octavian arrived in the city.

Something in his youthful bearing, the deep look in his eyes, perhaps, that seemed to go through and beyond the sight that met them, or the thin, firm mouth, seemed to squeeze the hearts of the toughest of Caesar’s veteran soldiers.

“Caesar!” they cried, when they saw Octavian. The tall, pale youth reminded them at once of their lost leader, of his will, and his wish that his work should be continued in this boy. As a man they flocked to Octavian’s standard.

Antony and Lepidus, preparing their army for battle with the assassins who had fled to the East, heard the cheers and pondered. Then, wisely, they decided to come to terms with this powerful boy.

As Caesar had once done with two of his friends, the three formed a triumvirate – a rule of three men. All powerful now, they began a series of terrible acts of revenge against the supporters of the conspirators in Rome, and one of their victims was the famous orator Cicero, who had tried to obtain a pardon for the assassins.

When the bloodshed was over, the triumvirate turned towards the East. There Brutus and Cassius waited with an army. The clash came at Philippi in Macedonia, where was fought a battle that ranks among the most decisive in the ancient world.

Lepidus had been left at home in Italy and it was for Octavian and Antony to fight for the empire. At Philippi Antony’s army made a much better job of it than Octavian’s – sufficient to give them the victory. In shame for their failure, Brutus and Cassius committed suicide.

In their hour of triumph Octavian and Antony decided that there was no more room for Lepidus. The triumvirate was thus reduced to two, sharing the control of the Empire between them by Antony taking the eastern provinces and Octavian ruling over Italy and the west.

At this time Mark Antony, the real victor at Philippi, was easily the most powerful man in the Roman world. His greatest and most costly mistake, however, was his decision to rule over Rome’s eastern provinces.

For among those provinces was Egypt. And reigning in Alexandria at the court of that country was the fabulous Queen Cleopatra. The spell she cast upon Antony is immortalised as one of the great love affairs of all time.

As Antony dallied romantically in Alexandria the eastern provinces he had been sent to rule became neglected and disordered. He was not a strong man – he had achieved fame more by the violence of his personality than by any depth of character – and Cleopatra was a clever woman. All the luxuries of the land of the pharaohs were put in Antony’s way to persuade him that there was no better life than life with Cleopatra.

Back in Italy Octavian fumed with rage. He had heard that Antony was planning to return to Rome, to restore the republic, no doubt so that he could speedily go back to Egypt and dally with his Queen. The last thing that Octavian wanted, of course, was a return to republican rule – what he wanted was supreme power for himself alone.

“Antony is a traitor!” he declared. “He wastes his time with Cleopatra, who is hostile to Rome’s interests, and neglects his government in the east. He has a wife and children in Rome, too, whom he has abandoned for this arrogant foreign Queen.”

The senators listened attentively and nodded their heads. It was time for a new civil war – Antony must die.

Early in the year 31 BC, Octavian landed his army at Epirus. For a long time neither side would attack, and peace talks went on for days. Finally, Antony decided that the battle would be fought at sea. Or did he? For, halfway through the battle, which took place off the west coast of Greece at Actium, Antony suddenly turned his quinquereme (a galley with five banks of oars) and fled.

No doubt Cleopatra, who did not want him to fight, was behind this move. But the impression was left in the minds of Antony’s soldiers that he never had any intention of fighting in the first place.

After that, the result was a foregone conclusion. Under the command of Octavian’s great minister Agrippa, the fast-moving Roman triremes cut the heavy, turreted Egyptian ships to shreds.

Hurrying back to Egypt with his beloved Cleopatra, the indecisive Antony pleaded to his old colleague for peace. But Octavian wanted none of it. Steadfastly he advanced upon Alexandria and laid siege to the city. There, in despair, Antony and Cleopatra committed suicide.

The tall, pale youth of a dozen years before was now undisputed master of the Roman world. And suddenly, for the first time for two centuries, that world was at peace.

One thing that could be counted upon for certain was that Octavian would not give up anything that he had won by hard military struggle. Inevitably therefore, the republic, with its ideals of shared government, disappeared. The process was a gradual one, but by the year 29 BC, a year after the decisive sea Battle of Actium, the republican form of government which had served Rome for nearly five hundred years, had been replaced by a new form of government, which we call the Empire.

The Emperor, of course, was Octavian. He took over all the offices of State and took the title of Imperator, which really means “victorious general.” The Senate also gave him the name of Augustus, which means “sacred,” and which is the name by which he is remembered today – the Emperor Augustus.

Augustus, however, was no despotic dictator. He was a wise and just ruler; he kept the Senate in its original form and maintained all the offices and institutions of the republican era. Out of the old republican forms and the new condition of one-man rule, he wielded vast powers which he never abused.

From this reorganised Rome Augustus forged a state that was able to transmit to nations then unborn – nations like our own – the civilisation, the learning and the law of classical times. Under his Empire, trade, industry and agriculture all prospered as never before.

Augustus, too, was a great builder – he did so much to beautify Rome that it was said of him; “He found the city built of brick and left it built of marble.” In those great marble buildings he established libraries and encouraged learning, especially the culture introduced from Greece.

But it is in the field of Latin literature that the Augustan Age – the phrase itself has come to be applied in the history of other nations to periods of great literary achievement – reached its greatest heights. Helped and encouraged by a wealthy friend of the Emperor’s named Maecenas, who was like a kind of “Minister of the Arts,” some of the greatest writers of all time flourished under Augustus.

They included Publius Virgilius Maro, whom we call Virgil, whose epic poem The Aeneid, telling the story of how the Roman world began and praising its grandeur, places him among the foremost poets of the world; and Quintus Horatius Flaccus, whom we know as Horace, the brilliant writer of Odes, Satires and Epistles.

Another great Augustan writer was the historian Titus Livius, or Livy. He wrote a History of Rome which consisted of 142 books, and its composition occupied him for more than 40 years. Only 35 of the books have survived, but that is enough for us to judge that his power of vivid description and his language mark the highest development of Latin prose.

In this great time, when all these famous men were making their splendid contribution to the story of our world, an even greater man was born. Ironically, Jesus Christ came into the world in the time of the Roman Peace that supplied the famous writers and architects with the necessary repose to celebrate their pre-eminence.

He was born in about the thirtieth year of Augustus’ rule, in Palestine, which was then a province of Rome, as Cleopatra’s Egypt had become after her death. The new religion founded in his name was to last much longer than the 40 peaceful years of Augustus’ rule; indeed, its impact was not to be felt during the Emperor’s term of government.

That term came to an end in AD 14, when Augustus was 77. During his last years he had drawn his adopted son Tiberius into the government of Rome, with the intention of making him his successor. In his youth Tiberius had been a brave and brilliant soldier; now, at the age of 56, when his adopted father died, he had become a very different man.

For, with his soldiering years behind him, Tiberius was now best known as an arrogant and aloof man with a bad temper. He was a traditionalist of the old school; he believed in government by an aristocracy and thought that Rome’s best times belonged right back in the third century BC, when the patricians were supreme and the people knew and kept to their place.

As the Romans sorrowfully burned the body of their first great Emperor, they had cause to wonder anxiously what sort of man it was who was about to inherit the largest empire ever known.