Dinkelsbuhl’s children were victorious in the Thirty Years’ War

This edited article about Bavaria originally appeared in Look and Learn issue number 619 published on 24 November 1973. 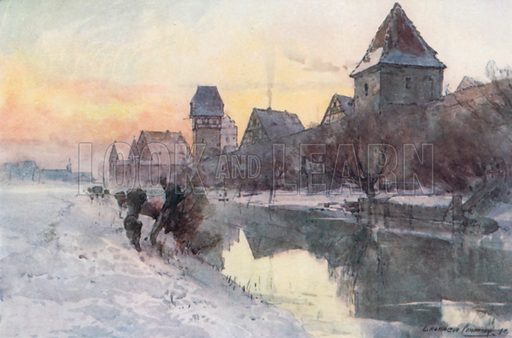 The fair-haired girl in the long-skirted dress and crisp white apron falls on her knees, clasps her hands, and gazes beseechingly up at the bearded man, dressed all in white, mounted on a horse in the medieval town gateway. Behind him the phalanx of soldiers stir, and shift their arms uneasily.

The man in white stares grimly down at the group of children clustered around the girl. His glance wanders, then pauses on one of them, a tiny blond boy standing finger-to-mouth. The grim lines round his own mouth soften. He looks up again at the crowds of people pressing in behind the children.

“Listen, all you citizens of Dinkelsbuhl. Your children have saved your town. For their sakes my soldiers will leave it unharmed. Never forget the debt you owe to the children,” he cries.

A wild peel of bells rings out over steeply pitched gables, ancient turrets and walls, quiet gardens and tightly-packed streets; the music of a hymn blends in with the clamour, and everyone in the overflowing square joins in the words.

For more than three hundred years now the people of Dinkelsbuhl, one of a string of beautiful towns on the Romantic Road which runs through Germany’s southernmost province, Bavaria, have been repaying the ‘debt’ they owe to their children for saving their lovely city. Even in the 1970s it still looks very much as it did in medieval days.

Every July its citizens hold a Kinderzeche, a ‘Children’s Treat,’ to remind themselves of the children who saved their town from destruction in the 17th century, when Swedish troops besieged it during the Thirty Years’ War.

In 1632, fourteen years after the war began, the Protestant Swedish army beleaguered the city, threatening total destruction if the people refused to surrender. The citizens split into two opposing groups, those strongly Catholic and loyal to the German Emperor, those who were Protestant and sympathetic to the Swedes. They argued so long that the Swedish Commander waiting at the gates became impatient and one by one cancelled all the concessions he had been prepared to give as bribes for a peaceful surrender. Although it was against his King’s instructions he also began to threaten to pillage the town if the citizens did not open the gates at once.

Legend tells that the gatekeeper’s daughter, Lore, overheard the Town Councillors arguing, and begged to be allowed to plead on the city’s behalf. She had heard that Colonel Sperreuth, the Swedish Commander, had recently lost his small son, and thought he might be touched at the sight of the town’s helpless children.

Her plan worked. Among the children she took with her one small boy looked so much like his own dead son that Colonel Sperreuth pardoned Dinkelsbuhl ‘for the children’s sake,’ and today the highpeaked houses, the solid walls, the tall towers and the quiet gardens are very much as they were when Lore and her friends walked steadily from the Town Hall to the Wornitz Gate to plead with the invaders.

There could hardly be a more perfect natural stage-set for the play which the Dinkelsbuhlers act each year to remind themselves of that far-off drama. The first part, when the Town Council argue, and Lore pleads to be allowed to help, takes place in the ancient Market Hall; the second, more dramatic, scene between Lore and the Swedish Colonel, in the Old Town Hall Square in front of the great town gates.

As the gates swing open the Swedish troops clatter into the square, headed by a trumpeter and the Colonel, dressed all in white. The Burgomaster hands over the keys and Sperreuth, still irritated by the resistance he has met, dismisses the Council with a contemptuous wave. He sneers at first at the children’s procession approaching him. But he pauses as Lore begs for mercy. Then, as he catches sight of the frightened little boy he capitulates and utters the words every Dinkelsbuhler knows by heart: “The children have saved the town. Never forget the debt you owe them.”

The play is repeated twice during the nine-day-long celebration. But it is not the only merrymaking. More important for the children themselves perhaps are the gaily-coloured paper cones stuffed with sweets and biscuits which are the ‘Thank-you’ present Dinkelsbuhl gives to every one of its younger citizens. There is a great deal of peering into one another’s cones and comparing contents, to make sure no-one has more than anyone else!

Preparations for the Kinderzeche begin round about Christmas, when the older male members of the community who take part in the play begin to grow their 17th century whiskers! Fever-pitch is reached in the last weeks of June and early July. Mothers and fathers get busy with paint-brushes and flower pots, decorating houses and hanging out the red-and-white banners which are Dinkelsbuhl’s own, the blue-and-white Bavarian colours, and the double-headed eagle which was the symbol of the old German empire.

The schoolboy band, under the town’s Bandmaster, rattle and toot away on drums and fifes at the traditional tunes; the Boys’ Battalion who will march in parade, wearing gorgeous 18th-century military uniforms, drill endlessly. Students practice a complicated sword dance, and medieval Guild dances. A fun fair and a medieval camp-site are erected. Through every window comes the sound of music, for there will be concerts and dancing throughout the festival.

For the girls the most exciting moment comes when Lore, the heroine of Dinkelsbuhl’s story, is chosen.

Apart from the play, the Festival Procession is the highlight of the celebrations. Everyone dresses up for this and everyone has a part to play. There are Swedish soldiers, headed by Colonel Sperreuth and his trumpeter; military provision waggons; peasants with their cattle, and city tradesmen; Town Councillors in their fur-trimmed robes and starched ruffs, headed by the Mayor with the town keys on a red velvet cushion. There is Lore, of course, with her flower-crowned children, carrying more flowers, and their Kinderzeche bags of sweets; groups of dancers, the Boys’ Battalion in their smart white, red and gold uniforms, periwigs and tricorn hats; farmers and their wives and children, all in Franconian costume, shepherds, bakers carrying a Schneckennudel (the special festival pastry) and a group of girls carrying a giant Kinderzeche bag.

On the Weinmarket the Colonel of the Boys’ Battalion pauses to recite a poem, his Spruch, which tells once again the story behind the Kinderzeche. He calls for three cheers for Dinkelsbuhl, and everyone sings the Kinderzeche hymn and remembers the moment, three centuries ago, when Dinkelsbuhl’s fate hung on the courage of a brave little girl. Then the merry-go-rounds begin to turn, the dancers to leap and sing and everyone joins in ‘the fun of the fair.’