This edited article about literature originally appeared in Look and Learn issue number 842 published on 4 March 1978. 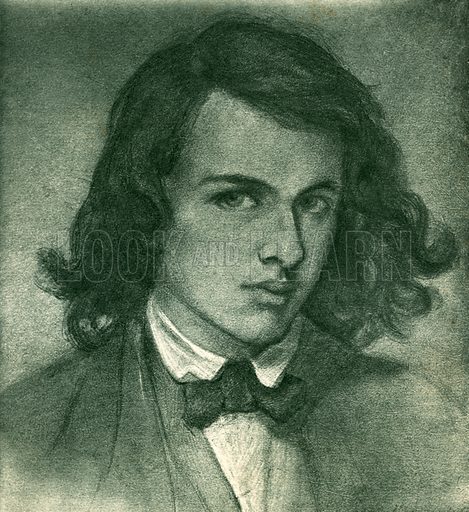 Rossetti (above) translated Villon’s most famous poem as ‘Ballade of the Dead Ladies’, with its famous refrain: “Oh, where are the snows of yesteryear?”

He was a thief, a fighter with a fatal skill with the blade, and a cold-blooded killer when the occasion demanded it. His friends were drunkards, loafers, scroungers and tricksters.

Yet this same man was to write some of the most beautiful poetry the world has ever seen. Scarcely three thousand lines of it have come down to us, but it is enough to put him among the greatest of the French lyric poets. His name was Francois Villon.

Born in Paris in 1431, he was first known as Francois de Montcorbier, this being the name of his father, who had either died or disappeared while Francois was still an infant. He was brought up, cared for, and educated by a canon of the church. Guillaume de Villon, by whose surname Francois became known, and whose efforts no doubt saw the boy into the University of Paris. There he took a master’s degree.

Considered brilliant, and only twenty-one years of age. Francois at this stage in his life gave no hint of the wild, reckless living that was to come. Perhaps if he had not been involved in a street brawl, he would have remained a gentle man, devoting his life to the poetry which was to make him famous. The brawl took place in one of the narrow streets of the little township of Saint Benoit. Faced with two armed men who had picked a quarrel with him, he drew his sword, egged on by the watching crowd. As blade met blade a priest rushed out from a nearby church to intervene. But too busy fencing to take a proper look. Francois thought it was one of his attackers leaping forward, and promptly ran him through.

The priest dropped dead at once and lay motionless in the dust of the street. Something like a groan went up from the crowd, while Francois’ two attackers quickly escaped into the maze of dingy alleys.

Within the hour Villon was in prison, charged with brawling in the streets. It was not to be his last confinement in prison by a long way. The affair was to set him off on the long road of an outcast.

Pardoned, Villon returned to Paris and promptly set about robbing a church although, luckily for him, he was far from home when his fellow thieves were caught and hanged, for one did not lightly take liberties with the clergy in the France of those days. But wherever he was, Francois Villon was always in trouble. In 1460, the poet was himself sentenced to death for theft, this time in Orleans. Much to his relief, he was released as part of the celebrations during a royal visit.

Most people would have learned their lesson by this time, but not Francois. His next year was spent in an underground dungeon at Meung, near Orleans, apparently for robbing yet another church. The dungeon was wet, full of toads and rats and bitterly cold, and he passed the time writing bitter verse about the bishop who had sentenced him for his crimes.

Villon seemed to have amazing luck in his dealings with the law. At Meung, he was saved for the second time by a royal visit during which, as was the custom, all prisoners were released. But by now his health had been ruined, and he spent the next twelve months writing his masterpiece, his “Grand Testament”, which contains much of what we know of his life.

There were four years in the life of Villon, however, that remained unaccounted for until 1877, when a Frenchman named August Longmon published the result of his long years of research into the life of Francois Villon. Little by little, he had pieced together much of the poet’s life that had previously been hidden – including the fact that he had almost certainly joined the company of the Coquille, a secret society of thieves and bandits who plagued medieval France.

When Villon returned to Paris the authorities showed that they had not forgotten or forgiven his earlier escapades. He was condemned to death, but his incredible luck held yet again. Banished for ten years. Francois Villon trudged out through the gates of Paris, only thirty years old, but bald, bent, scarred and crouching; a broken man, never to be heard of again.

Nobody knew better than Villon that he was a rascal, and his “Grand Testament” is full of a kind of cheerful acceptance of the fact that sooner or later he must foot the bill for his dissolute life. One may argue that almost anything can be forgiven a man who wrote with such a magic touch. But, his verse apart, he was clearly not to be admired.

Considering the beauty of Villon’s poems it is somewhat surprising that nearly four hundred years passed before his work was read outside his own country, and then it was only because a number of nineteenth-century English poets began to translate his work, much of it in medieval French slang. Since then, he has been the subject of a number of books and several films, presenting him as a far more romantic figure than he really was.