The circumcycling of the globe by Louise Sutherland

This edited article about cycling originally appeared in Look and Learn issue number 811 published on 30 July 1977. 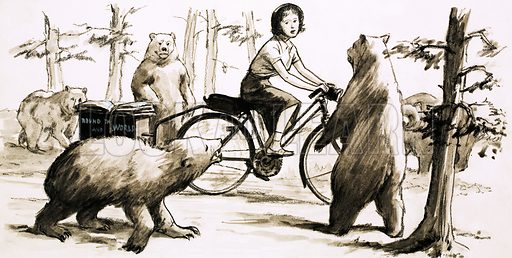 Louise Sutherland was born in Dunedin, New Zealand, in 1929. When she left school she trained as a nurse and on qualifying she came to England on a working holiday.

Louise did not have a lot of money to spare so she decided to see the country on a bicycle. With this end in view she set off to tour Cornwall, but after a couple of days a continuous headwind dampened her spirits. As she had her passport and £85 with her she turned about and allowed the wind to assist her towards Dover. She would have her holiday on the Continent.

It was when she landed on French soil that the great idea came to her: why should she not continue travelling and see the whole world? She had her nursing certificate and when she needed money she could get work in hospitals.

She toured Europe from the topmost tip of Lapland down to Yugoslavia. In Switzerland she had a trailer made to carry her camping gear.

She had her share of adventures. In Trieste a bomb exploded near a cafe where she was sitting and she gave first aid to the injured.

She crossed to Cyprus and then to Haifa, from where she cycled to Nazareth. Here she worked for some months as a nurse at a mission hospital. She rode on to Jerusalem, and pedalled through the Valley of Jordan. In Beirut more hospital work built up her funds, and six months later she reached Baghdad.

Arriving in India by ship, she set out to cycle across the sub-Continent, and here she had her only really unpleasant experience with people. Outside Gwalior two robbers attacked her on a lonely road, but luckily for Louise a bus came along at the right moment and the men were arrested.

So her journey continued. She called on her family in New Zealand. Then crossed the Pacific by ship and cycled across Canada and down to New York.

On one occasion, when cycling over the Rockies, she turned a corner and found herself in the midst of a large family of grizzly bears. It’s difficult to say who was the more surprised by the encounter!

When Louise got to New York, six years after she had begun her great ride, she was without money to pay for her fare across the Atlantic to England. Again luck was on her side. She entered a television quiz show and won enough to buy her ticket.

On 25th July 1957 she was once more in England, pedalling her way through the South London suburbs towards the centre of the city. On her round-the-world trip she had cycled well over 20,000 miles on the same machine – without a single puncture!