The curious case of Oak apples, spangles and galls

This edited article about insects originally appeared in Look and Learn issue number 803 published on 4 June 1977. 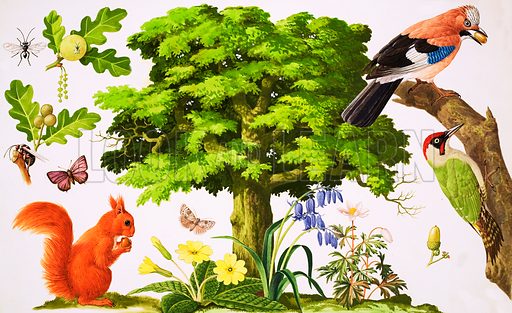 The Oak tree and its vivitors, including the Oak Apple and Oak Gall Wasp, (top left) and Marble Galls and Marble Gall wasp beneath them. Pictures by John Rignall

If you look carefully at the undersides of the leaves of an oak tree in mid-summer you may well find on some of them a number of tiny discs. They are usually a yellowish colour with brownish red spots, and there may be as many as a hundred on a single leaf.

The discs are called spangle galls, and appear to be fixed flat on the leaf in very much the same way that a stamp sticks on a letter. In actual fact the spangles are attached to the leaf by a very small stalk.

The spangle galls are not part of the leaf. They are, in fact, produced by an insect at one stage in its life cycle.

Some weeks before the spangles appeared, the female of a small species of wasp, called Neuroterus Baccarum, laid a number of eggs on the leaf. In due course, the eggs hatched into grubs, and the grubs, feeding on the leaf, caused the spangles to appear.

In the autumn the spangles containing the grubs fall off the leaves on to the ground at the foot of the tree. Later, the oak tree sheds its leaves and these fall on top of the spangles, so that throughout the winter the grubs are protected from the cold. In the meantime inside each spangle, a tiny grub is feeding on the spangle.

In due course the grub becomes a pupa, and then develops into a small wasp. Throughout the rest of the winter, the little wasp remains safely encased in the remains of the spangle that has sheltered and fed it from its grub stage.

With the return of spring, the little insects come out of their spangles and crawl up the trunk of the tree. But they are not at all like the wasps that laid the eggs from which they were hatched. They are wingless and more like ants.

The ant-like descendants of the wasps then lay the eggs on the underside of the young oak leaves, and these eggs in turn, also produce galls. But the galls are different from the spangle galls which appeared on the leaves the previous summer. This time the galls are like berries, some green, some pink, and are called currant galls.

Eventually the eggs in the currant galls hatch into grubs, and the life cycle is completed when the grubs develop the following spring into new wasps. This time, however, the wasps are like those which laid the eggs in the previous generation.

Just how is a gall produced? The answer is that the insect which lays the egg compels the plant to grow what is, in effect, a new organ. When the leaf is punctured by the insect’s ovipositor, or egg laying organ, the plant is punctured. The plant forms a ‘scab’ over the wound.

This scab covers the egg, and when the grub hatches from the egg it starts feeding. The plant then has to produce more substance at that particular spot to replace the plant matter eaten.

The really interesting thing about this process is that the developing insect compels the plant to produce a tailor made gall ideally suited to its growth.

Not all the galls are produced by the wasp we have mentioned. In actual fact there are scores of different types of galls, and they are to be found on many different kinds of plants and trees, all of them with their own particular characteristics.