The first of the Iron Clads

This edited article about ships originally appeared in Look and Learn issue number 800 published on 14 May 1977. 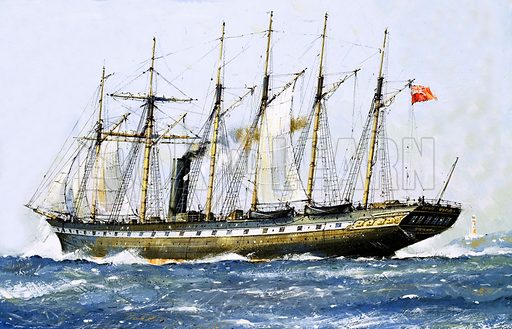 Iron, said the scoffers, could never be used for ship-building. It took men like John Wilkinson and Isambard Kingdom Brunel to prove to them that this heavy metal could really be made to float

“Build us a ship of iron!” “It cannot be done! It is contrary to the will of God for iron to float.” Thus said the scoffers in all religious sincerity and scientific ignorance. Everyone knew that wood floated and iron sank. Therefore it was common sense to build ships of wood and not of iron.

That was what most people thought about iron ships in the 18th century – if they though about them at all.

But whether iron floated or not, iron ships were inevitable. They had to happen.

The traditional oak forests of England were vanishing. Only the best oak trees were of any use to the ship-building industry which needed a thousand prime trees to build one 700-ton warship or a merchantman.

In a survey of the royal forests in 1608, James the First was told that there were 200,000 trees suitable for building naval ships. By 1783 there remained a quarter of that number.

Shipbuilders, who were mainly in the south of England where the oak forests had been thickest, were forced to travel the length of the kingdom in search of timber.

The desperate shortage of oak forced the builders to look for alternative materials. Gabriel Snodgrass, chief surveyor of the East India Company, began using iron brackets in the construction of the company’s fine merchantmen, but it was left to an iron-master of the north to make iron float.

He was John Wilkinson, more commonly known as Iron Mad Wilkinson. He had many iron mills in Shropshire and the north, together with ships, farms, alehouses and brickyards.

Wilkinson benefited from the discovery of the improved iron-manufacturing processes of the Darbys of Coalbrookdale, with whom he worked to build the first iron bridge in the world (1779). He then went on to make iron pipes for the Paris water supply and cannon for the armed forces. To carry his products in 1787 he built himself a canal barge – of iron.

But John Wilkinson was “Iron Mad”. He foresaw roads of iron and iron buildings, too. On his death he left instructions that he was to be buried in an iron coffin.

He was, in the opinion of many, an iron-bound eccentric, so few sensible people took much notice of the iron barge. However, iron was becoming cheaper and wood scarcer. Shipbuilders were forced to use more iron frames and brackets in their work.

Then heavy iron steam engines were put into wooden hulls. In 1801 the Charlotte Dundas puffed along the Forth and Clyde Canal, and the first regular passenger paddle steamer Comet churned the waters of the Clyde between Glasgow and Helensburg in 1812.

Thanks to iron makers like Wilkinson, iron was rapidly becoming an everyday all-purpose material. It was becoming cheaper and it was stronger than wood.

In after years one or two small iron-hulled boats followed in the wake of Wilkinson’s barge. They were often manufactured at inland iron-works and assembled, plate by plate, at shipyards miles away. These curiosities were used only on canals and rivers, but in 1822 the steam-powered iron ship Aaron Manby crossed the channel to France, and regular cross-channel services began.

The Aaron Manby had been made in the Black Country and assembled on the Thames in London.

Still the opponents of iron ships were not convinced. They said that iron would rust and even as late as 1851, the year of the Great Exhibition and the magnificent iron and glass Crystal Palace, the Admiralty did not approve of iron-hulled ships because there was no way to plug shot holes in iron as could be done with wood.

In spite of all the objections, iron ships gradually won favour. They were lighter, size for size, than wooden ships with oaken hulls. Thus an iron ship had more room for its fuel, for its engines, and for cargo and passengers.

The S.S. Great Britain built by Isambard Kingdom Brunel, which was the first screw-driven iron vessel to cross the Atlantic, was launched in 1839.

She had room for 360 passengers. For a year she made regular Atlantic crossings, reducing the time taken from 60 sailing days to 14. Then after running aground and spending the winter on the Irish coast she was refloated and spent 20 years in the Australian wool trade before being abandoned as a hulk in the Atlantic mud with her iron hull still unbroken.

The story of the S.S. Great Eastern is the story of a ship built before its time. It was not large – it was huge. No ship outdid it in size for 41 years – ten years after the Great Eastern itself had been broken up for scrap.

She was large because steam ships had to be large to be profitable.

The inefficient steam engines of the day devoured coal at an enormous rate, which meant in this case that on an ocean crossing, as much as threequarters of a normal ship’s space would be filled with fuel.

She was built at Millwall, on the Thames, but such was her weight that when launched she slid and killed one man, injured four others and stuck. It took months of frantic effort with hydraulic rams to push the mammoth ship into the water.

Yet in spite of her double hull, iron safety bulkheads (features of all modern liners) her paddle wheels and screw propeller she was never a success. She was too big for the engines of the day to drive her fast, designed for the Far Eastern route she was too big to pass through the Suez Canal when it opened and was finally used for laying submarine cables – but that is another story.

Yet for all her size, the Great Eastern could be lost aboard one of the mighty super tankers now roaming the world’s oceans.