The legends of Svyatogor and Sadko

Posted in Legend on Thursday, 1 September 2011

This edited article about Russian legends originally appeared in Look and Learn issue number 800 published on 14 May 1977. 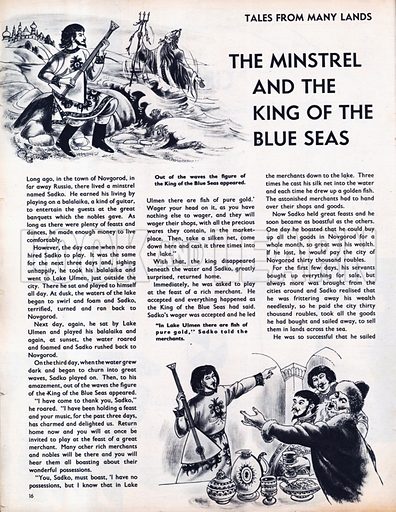 Svyatogor was so proud of his strength that he announced he could lift the earth. But things did not work out quite as he planned . . .

Could any champion, however strong, lift the whole weight of the earth? “If anybody can, I am that person,” thought Svyatogor, who was a bogatyr – or “elder valiant champion” – of the ancient Russian people.

Svyatogor is supposed to have been so strong that the legends say his muscles weighed him down.

But he was proud and declared that if he could find a place where all the weight of the earth was concentrated, he would lift it.

His searches took him to a treeless plain, called a “steppe,” where he found a small bag. When he poked it with his staff, it did not move.

Neither did it budge when he touched it with his finger. Reaching down from the saddle of his horse, he grasped the bag in his hand, but could not lift it. He dismounted and took hold of the bag with both hands. With a great struggle, he lifted it as high as his knees.

However, Svyatogor was not as successful as he thought, for the bag had not risen. Instead, he had sunk knee deep into the earth; and lie was stuck there firmly.

Svyatogor, had indeed found the weight of the earth, but God punished him for his pride.

At the time when this story was told, the people had adopted Christianity. But their ancient legends of pagan gods and goddesses were still enjoyed.

Sailors were also mindful of the power of gods, for the sea was ruled by a Tsar or emperor.

Sedako, a rich merchant whose ships sailed the seas, had cause to remember this, when the ship in which he was travelling stopped and refused to continue the trip.

For 12 years, Sadko had sailed the seas, and this had never happened before. Then Sadko remembered that he had never paid tribute to the Tsar of the Sea. So he filled a large cup with pure silver, another with rare pearls and a third with red gold.

He put these treasure-filled cups on a small plank and pushed the plank into the sea. However, the small plank floated and would not sink. This, thought Sadko, meant that the Tsar of the Sea preferred the sacrifice of a man.

Lots were drawn, and Sadko found that he was the one who should go to the sea lord.

Taking a statue of St. Nicholas and his gusli – a stringed musical instrument – he climbed out of his ship and on to the plank.

At once he fell asleep. When he awoke, Sadko found himself in a white stone palace. Before him stood the mighty Tsar of the Sea. To please the Tsar, Sadko played his gusli and the Tsar began to dance.

So furiously did he dance, that he caused a fierce storm which tossed ships about on mighty waves and wrecked some of them. To stop the dancing and calm the storm, Sadko broke the strings of his gusli.

In a miraculous way, Sadko returned to land, always remembering after this to pay his respects to the gods of the waters.

For a further 12 years, he sailed on the river Volga. He knew that it was wise to cut a huge slice of bread, put salt on it and put it on the wayes of the Volga.

This so pleased the god of the Volga that it spoke to Sadko and asked him to take a message to its brother, the Lake of Ilmen.

After Sadko had done this, the lake told Sadko to cast three of his biggest nets on its water. They were miraculously filled with fish. Overjoyed, Sadko took the fish to his warehouse where they were magically changed into silver.

Russia has no more of these ancient heroes. Their end came in a battle in which a band of them fought two gods. But when the gods were attacked they became four; and when they were attacked again, they became eight, and so on.

As the battle went on, the gods’ numbers kept doubling until after three days, three hours and three minutes the champions ran in fear to the stony mountains and hid in dark caves where each of them was turned to stone!

From this time, many of the functions of pagan gods were transferred to Christian saints.