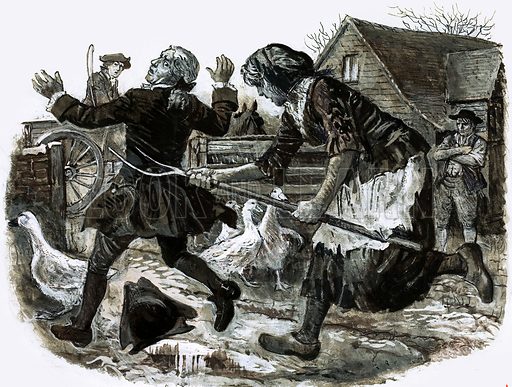 Any visiting stranger would be driven away from the Dancers’ farm by Daniel’s sister wielding a pitchfork. Picture by Ken Petts

North West of London and about 15 kilometres from the capital city, is Harrow. This was good farming country in the 17th and 18th centuries and during that time the farmers prospered, among them the Dancer family. When Daniel Dancer inherited the family fortune in 1736, he and his sister could have enjoyed a very comfortable life. Instead they lived like the poorest peasants. And one day, long after Dancer’s death, he was transformed into one of our best-known Christmas characters.

Every Saturday evening Daniel and his sister sat down in their Harrow Weald farmhouse to a frugal meal of cooked old bones and hard-boiled dumplings. During the following week they would eat the dumplings at the rate of one a day. Wearing tattered old clothes, Daniel would go on a bone-hunting expedition round his farm land. If he saw a dog with a bone, he would chase the dog away with a stick, grab the bone and put it in his sack.

Daniel’s sister wore dirty old rags and looked as scruffy and poor as her brother. She spent much of her time inside their derelict home cooking scraps of stale food.

If a stranger dared to wander onto the Dancer farm, she would rush from the house armed with a pitch-fork and make a determined attack on the unfortunate intruder. Daniel begrudged any pennies he might have to spend on his sister; but he liked having her around as a free servant.

The Dancers avoiding spending whenever possible. Soap cost money and to avoid having to use soap Daniel would rub his hands and face with wet sand and dry himself in the sun. Then he brushed off the sand, put on his tatters of clothing and tied a hay band round his waist. As he walked round his farm he looked like a scarecrow come to life.

It is easy to believe that two such strange people had few friends. When Daniel’s sister was seriously ill hardly anyone came to see her. In fact her only visitors were the Dancer’s neighbours, Lady Tempest and her brother, Captain Holmes.

They brought her food and suggested that Daniel should send for a doctor. He refused to do this, saying that doctors cost money. As a result she was neglected and died. A legal battle followed over her will and in the end Daniel received all her money: an amount of £2,000, a very considerable sum in those days.

Even when his sister had been alive, Daniel’s home had been dirty. Now that she was dead, it became a filthy pigsty and his farm became a wilderness of weeds. Daniel engaged a 60-year-old servant named Griffiths to work for him at a wage of one shilling and six pence (7.5p) a week. Griffiths had managed to save £500 and had the sort of mean and thrifty habits that Daniel liked.

The two men became a familiar sight as they went out together to collect bones and other scraps. Griffiths enjoyed an occasional drink of ale, which Daniel thought was a terrible waste of money.

If he was caught by Daniel with a glass of ale, Griffiths would try to make amends by taking a sack and going on his own to search for scraps.

Furiously angry at such treatment, Daniel took her to court to recover his three pence. To his horror the woman won the case and Daniel had the extra expense of having to pay costs, which came to five shillings. It was a moment of terrible misery for Daniel.

Daniel’s poverty-stricken appearance often caused people to mistake him for a beggar. Once he went to London and was standing outside the Royal Exchange building, talking to Jemmy Taylor, the Borough Usurer.

A man who had just come from the Royal Exchange saw what he thought was a poor old beggar and slipped some money into his hand. “Ah well!” Daniel said to the astonished Taylor, “every little helps.”

When Lady Tempest visited Daniel she would try to encourage him to spend a little money on his home and his food, but Daniel would not listen to such ideas. He never spent a penny on himself unless he had to and even then he tried for the cheapest purchase possible. He apparently cared about nobody and in return was regarded by his neighbours as a miserly old skinflint. The only creature for whom he showed any love was his old dog.

All the time Daniel was surrounded by money. It was hidden all over his house in secret places and he must have been very fearful of thieves. In the autumn of 1794, at the age of 78, Daniel Dancer lay dying in his filthy old home. Lady Tempest came to see him and sent for the doctor in spite of Daniel’s protests about the cost.

It was too late. Daniel Dancer died, leaving all his property to Lady Tempest; but she too died the following year and everything went to Captain Holmes.

When the home of Daniel Dancer was cleaned and tidied up, money was found hidden in tea pots and other unlikely places. His total wealth amounted to £10,000, a fortune in those days. Charles Dickens, ever on the look out for strange characters to put into his books, heard of this Harrow miser and based Scrooge on him for the story of “A Christmas Carol”.