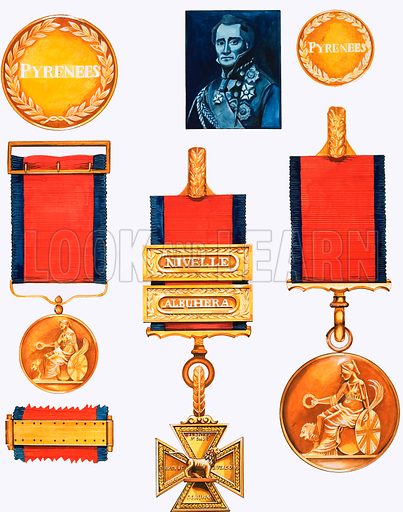 The Duke of Wellington (top) surrounded by the Small and Large Gold Medals and the Gold Cross, by Christopher Rothero

In the years between 1808 and 1814 the British Army was locked in a bitter struggle against a multi-national force commanded by Napoleon’s marshals, consisting of Frenchmen, Italians, Poles and men of a dozen different German states. The war, which had no less than 15 major battles in Portugal, Spain and France, came to be known as the Peninsular War.

It was a particularly savage contest, in which the contestants showed little regard for each other or for the civilian populations of the countries where they fought. Perhaps it was this ruthlessness that helped Britain’s Peninsular Field Army to develop into the finest army in Europe, shaped by one man, the Duke of Wellington.

By 1813, Britain was so proud of the army’s achievements that it sought a special way of commemorating them and rewarding the generals that had made it all possible. Thus the prince regent, acting on behalf of his father George III, instituted the Peninsular Gold Cross and Gold Medals for senior officers: the common soldier was not to receive a campaign medal until the Battle of Waterloo.

A Military General Service Medal for men in the ranks was struck to celebrate the victories of the Peninsular War but it was not awarded until 1847, by which time many of the would-be recipients were either dead or had lost contact with the army. Most of the ordinary soldiers of the period could neither read nor write, so they were probably not even aware that they were entitled to a medal. Ironically, collectors will now pay as much as £1,000 for one of these Military General Service Medals.

However, the senior army commanders received awards for each battle they fought in as the war progressed. The first action was rewarded with a gold medal. It was a large medal if the officer was a general officer and a small medal if he was in command only of a regiment or battalion. No officer below the rank of major was eligible for the award.

As the war progressed some officers received so many Gold Medals that it became difficult and inconvenient to wear them, especially as decorations in those days were often worn in battle.

To overcome this it was decided to institute a system of battle clasps to be awarded with the medals, and in addition to this a gold cross was struck. The name of the recipient’s first battle was engraved on the reverse of the medal, and each subsequent action was recorded by the award of a campaign clasp bearing the name of the battle until the recipient had a gold medal with two battle clasps attached to the ribbon.

After the next battle the gold cross was awarded and the medal withdrawn, the recipient’s first four battles now being recorded within the arms of the cross. Once an officer had earned a gold cross, all following battles were recorded with campaign clasps attached to the ribbon on this decoration. As it turned out, so many officers were reluctant to return their medals when they received their cross that the government allowed officers to retain them.

The medals were simple, yet attractive, the obverse bearing a seated figure of Britannia holding a laurel wreath in her right hand and a palm branch in her left. Beside Britannia, slightly obscured by her left hand, was an oval shield decorated with the Union Cross.

The reverse was simply engraved with the name for which the battle was awarded, surrounded by a laurel wreath. Most of the medals were suspended from a button-hole by a crimson ribbon with blue edges, but a few were adapted to hang around the recipient’s neck in the same manner as the Gold Cross.

The exquisite gold crosses were 3.8 cm in diameter, the obverse and reverse bearing the same design. A superbly sculpted British lion was mounted on the centre of the cross, and a fine border of laurel leaves decorated the edges. Each battle was recorded in raised capital letters within laurel edging. The award was designed to hang from the throat, its crimson and blue ribbon passing around the neck.

In recent years the name Peninsular Gold Cross has been changed to Army Gold Cross; this is because some of the campaign clasps record battles not fought in the Peninsular War. Clasps were granted for the battles of Martinique, Guadeloupe, Java, Fort Detroit, Chateauguay and Chrystler’s Farm, all of these places being outside the geographical area specified by the medal’s title.

There were also a few exceptions made in the awarding of the medal. Eleven small gold medals were awarded to officers below the rank of major in the English and Spanish Armies. In fact one small gold medal was awarded to a Non-commissioned Officer – Sergeant-Major Don Santiago Ruiz of the Spanish Army.

Perhaps the most famous recipient of the Army Gold Cross was the army’s commander-in-chief, the Duke of Wellington. His portrait by the great Spanish artist Goya can be seen in the National Gallery, London. At the time the picture was painted the Duke’s Gold Cross had only three clasps. He was eventually to be the only officer to be honoured with a Gold Cross and nine clasps. This decoration is now on display in the Wellington Museum at Apsley House in London.