The shipwright’s craft and craft

This edited article about the shipwright originally appeared in Look and Learn issue number 1019 published on 19 September 1981. 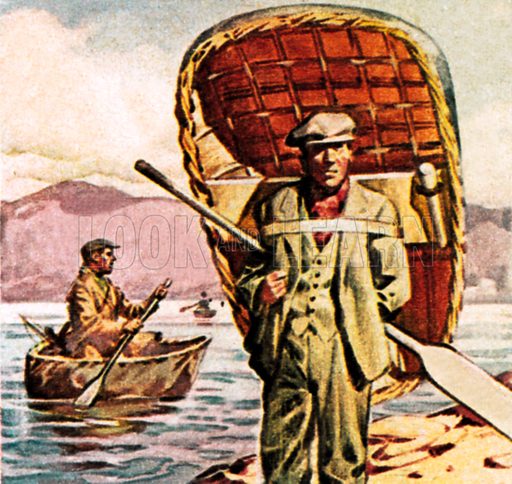 Coracles are still made and used in Wales

Wooden ships were once England’s pride; indeed they were the foundation upon which the British Empire was built. The men who built such vessels have always been admired craftsmen. The shipwrights of London were recognised as a “Brotherhood” as far back as AD 1260. The same has been true of many countries with coasts or great rivers.

Those who built the Greek galleys of Homer’s time were certainly an Èlite. So were the craftsmen who made the deep-sea dhows of the kind that carried Sinbad and his mythical companions from the Middle East to the fabulous lands of China.

Although today’s maritime trade is carried on by gigantic steel container-ships and tankers, the shipwright’s and boat-builder’s traditional skills have not been lost. In many countries they are being revived, usually for pleasure craft but sometimes also in the interests of historical research.

One famous marine archaeologist, Tim Severin, built a large coracle or curragh of wood and leather as a replica of an Irish ship of the Dark Ages in which St. Brendan may, or may not, have discovered America. Severin then sailed it across the Atlantic himself.

Now he has built a replica of a 9th-century Arab dhow with a stitched hull which has sailed in the wake of Sinbad the Sailor from Oman to China. Old craftsmen and their ancient skills had to be brought from many lands to build both these ships.

The sort of techniques you can see in traditional wooden boatyards all around the world might not be as ancient as those that built the leather curragh or the stitched dhow, but they still go back a century or so. Oak, larch and mahogany are the woods most commonly used in England; oak for the keel, larch and mahogany for planking, stringers, benches and so on. The best wooden masts are normally made of Douglas fir.

In Greek and Roman times, the planks of ships’ hulls were assembled first, with their inner frame of timbers being added afterwards. This made a wonderfully strong boat, but it was heavy. It was also a slow process. Nevertheless, the “planks-first” system can still be seen in the construction of many small craft, particularly for ships’ lifeboats, which have to be really strong.

A “frame-first” technique was developed in the so-called Dark Ages (5th to 12th centuries), probably in Moslem countries of the eastern Mediterranean, which were desperately short of wood. Here the frame or skeleton of a hull was constructed before its much thinner planking was added. This system was quicker, cheaper and used far less wood. Most large wooden ships are still built this way.

Whichever system is being used, the master craftsman and his assistants have to make their keel first of all. This, together with its prow and stern-post, is made lying on its side before being placed the right way up in its bay. If, for example, a planks-first lifeboat is to be built, a temporary framework of mouldings is next nailed to the keel. These give the boat its shape as the planks are being built up from the keel, inside the mouldings.

A ship’s hull has a much more complicated and subtle shape than might at first appear, with many twists and bends in its planking. This is one reason why planks have to be steamed to make them flexible. Various methods are used, one of the most common being “cooking” in a huge steaming box like an oven in which the planks, as well as other pieces of wood, are cooked for quite a long time.

Each plank is nailed or riveted to the ones above and below it, and only when all are in place can the timbers, the interior ribs or skeleton, be added. Of course, these often have to be steamed as well so that they can be gently bent into the correct shape.

Making a frame-first hull might seem simpler, but it takes just as much skill. To some extent a planks-first hull will adopt its own smoothly curved lines because of the springiness of the steamed planks. But with a frame-first hull, the shipwright has to get it right the first time, for his eye alone decides on the ship’s lines.

One traditional boat that really does adopt its own shape is the coracle, which is still to be seen on the rivers of Wales. It has no keel, but is like an open-work basket of split willow wands drawn up and held together at the gunwales by a surrounding band of interwoven willow or hazel rods.

A bench-like seat also pulls two sides of the coracle together, giving it a boat-like shape. In ancient times these coracles were covered with leather, but today they have a calico cotton covering, waterproofed with pitch. Slightly different forms of coracle are to be found on different Welsh rivers, but their construction is essentially similar.

All over the world, traditional boats are still being built. Despite new inventions like plastic, glass-fibre and even concrete hulls, the ancient craft of the shipwright and the boat-builder is, in fact, flourishing.