Victory for Britain and for women in WWI 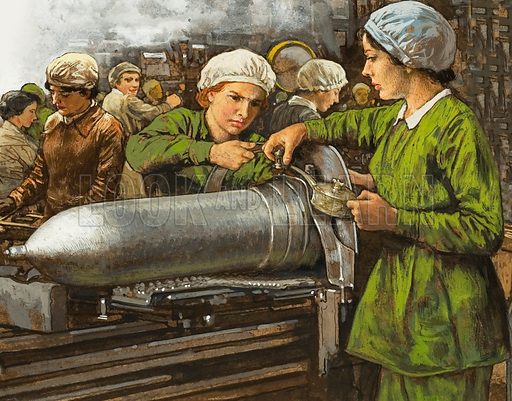 Women working in munitions factories in World War I were essential to the war effort, by Ken Petts

“We demand the right to serve” proclaimed a bold banner which hung across the float leading the huge procession, as it wound its way through the streets of London, on 17th July, 1915. Eleven thousand women flocked to the tables placed along the route of the march, to sign their names in answer to the call for volunteers for munitions work.

Only a year before, Mrs Pankhurst had been released from prison yet again, weak and ill after a hunger strike. But the campaign for votes was set aside as her militancy was employed not against but for the Government, and she organised this “Call to Women” in answer to a plea from Lloyd George, then Minister of Munitions.

The response was enormous, even though there was little for the volunteers to do, as neither the training centres nor the factories had been prepared to receive them. Many women had spent their savings to travel the long distance to London, and now found themselves stranded and unemployed.

Nevertheless, they were not discouraged, for, like much of the country, the suffragettes were gripped by war fever. The enthusiasm they had shown in the cause of female suffrage was now dedicated to what was seen as the national interest. At the outbreak of war in 1914, Mrs Pankhurst had called for a complete suspension of all militant activities, and redirected her anger against the Kaiser: “What is the use of fighting for a vote if we have not got a country to vote in? With that patriotism which has nerved women to endure torture in prison for the national good, we ardently desire that our country shall be victorious”.

The Government immediately issued an amnesty to all suffragette prisoners. This marked the end of the Women’s Social and Political Union but the National Union of Women’s Suffrage Societies survived. In 1914, Millicent Fawcett pledged its services to the war effort: “Let us prove ourselves worthy of citizenship, whether our claim is recognised or not”.

Not all members of the NUWSS were as eager. Some were outright pacifists, who felt that involvement with bloodshed in any form was wrong. In 1915, half the Executive and many officers of the Union resigned in protest at the stance adopted by Mrs Fawcett. Such ideas were scorned by the rest as old-fashioned and unpatriotic, however, and the Union threw itself zealously into war work.

During the first months of the war, there was little work to offer the keen volunteers. Even women doctors were rejected by the War Office. But soon female enthusiasm began to find outlets. Thousands became nurses, and worked with the Army and Naval nursing services, or staffed ambulances, convalescent homes and hospitals. When Belgian refugees started to arrive in England, women provided them with hospitality and organised collections of money and clothes.

The war had thrown a quarter of a million working class women into unemployment, but the growing shortage of men soon meant they were needed again. Intensive training sessions were organised to turn parlourmaids and daughters at home into tool-setters, charge hands and factory supervisors.

Employers were impressed, for the women proved patient, willing and, above all, uncomplaining. Naturally, male workers were very hostile, as they saw their jobs being filled by unskilled women who had served no apprenticeships, and who accepted considerably lesser wages. Alarmed, the trade unions envisioned all their hard-won gains being swept away on the tide of war.

In many factories, men refused to work with women. In others, they refused to teach them, and generally made their lives unbearable. Eventually, the Government was forced to agree to protect wage-rates and to restore “pre-war practices” as soon as the war was over.

Male opposition was appeased, and soon nearly half a million women were employed in munitions work – in shipbuilding, aircraft, ordnance, chemical, rope, rubber, steel and iron works. They also became tram conductors, chimney sweeps, electricians, bakers – the only trades closed to them were mining and building. In the Land Army women ploughed, milked and weeded, and by mid-1918 about half a million women were employed in agriculture in England and Wales. They even managed to join the services, and from 1917, 150,000 women became auxiliaries in the Army, Navy and Air Force, although it was the brave medical women who came closest to the horrors of the French and Belgian Fronts.

The war changed many people’s opinions about women. In many different ways, the necessities of war had destroyed countless conventions and transformed women’s lives. For instance, the tight, restrictive clothing which had made exercise and good health so difficult, disappeared for ever.

Tragically, these changes had not come about peacefully. The war brought death to nearly a million men. Husbands, sons, brothers and fathers departed for the Front, never to return. The Victorian family, which had done so much to keep a tight rein on its female members, was gone.

The experience of the war certainly made it obvious that what the feminists had fought for could no longer be denied: the question of suffrage must be settled.

In January, 1917, an all-party parliamentary conference reported its proposals for electoral reform. It recommended that female householders and the wives of householders should be entitled to vote, as well as all women over the age of 30 or 35. Although this was hardly a fulfilment of the great suffragist aim of votes on equal terms with men, the women were unwilling to oppose it. Mrs Fawcett informed the Prime Minister – now Lloyd George – that they would support a Bill based on the report, as long as 30 years was the age limit.

The principled determination of the pre-war years was gone, perhaps because the women now found few enemies to fan the fire of their resolution. They were relieved to have achieved some form of settlement.

On 19th June, 1917, the Ladies’ Gallery at the House of Commons was packed as eager women gathered to witness the debate on the Women’s Suffrage Clause of the Representation of the People Bill. Over the years, many hopeful women had sat in those places, their faces pressed to the bars of the grille which separated them from the all-male body of lawmakers below.

Now, as the women peered down from their “cage”, there was a quite different atmosphere. The House buzzed with excitement, as Members thronged the benches to overflowing, many being forced to stand below the Bar and in the side galleries.

The tide had completely turned. When a vote was taken, the victory was beyond even the wildest dreams of the suffragists: the clause mustered only 55 opponents in the whole House, while a massive 385 voted in favour.

Later that year, a petition was drawn up for the removal of the undignified grille which shut off the occupants of the Ladies’ Gallery from the House. This was circulated in secret to MPs’ wives. On the morning of the day when this motion was to be put before the Commons, MPs of all parties found copies of the petition on their breakfast tables – and 264 of them recognised their wives’ signatures! When it came to a debate, no objection was made. The iron grille was removed.

One more hurdle remained. The House of Lords had traditionally been the stronghold of anti-suffragists, with Lord Curzon, Leader of the House, a particularly implacable enemy. The Bill came before the Lords in January, 1918.

Lord Curzon rose to wind up the debate on 10th January to a hushed, expectant audience. As he did so, one of the policemen at the door went to the committee room to inform a number of suffragists who were meeting there. His words were reassuring: “Lord Curzon is up, ladies, but ‘e won’t do you no ‘arm.”

The policeman was right. Although Lord Curzon spoke against the women’s cause, he ended by exhorting the peers not to go against the hugely favourable vote that the Suffrage Clause had received in the Commons. The fight was won, and the Clause carried by a majority of 63 votes. On 6th February, the Bill received royal assent, and voting rights for women became enshrined in British Law.

Emily Davies died in 1921. She had lived to see great changes come about, and now that most cherished hope of all, the right to vote, was secured for nine million of her countrywomen. Millicent Fawcett wrote, “The history of the women’s movement for the last fifty years is the gradual removal of intolerable grievances . . . I have sometimes compared it, in its slowness, to the movement of a glacier. But like a glacier it was ceaseless and irresistible”.

Several women stood as parliamentary candidates in the next General Election, which took place only four weeks after the defeat of Germany, in December, 1918. Only one female was returned: Countess Markievicz, the Irish Republican, was elected for South Dublin but, like the 72 other successful Sinn Fein candidates, she refused to take the Oath of Allegiance, and so the first post-war Parliament was an all-male affair. A year later, a by-election returned Lady Astor as Conservative Member for the Sutton Division of Plymouth, and the first woman MP took her seat.

In 1928, the Equal Franchise Act at long last accorded women votes on the same terms as men. There were now 15 million women electors, as compared to 13Ω million men. On 14th June that year, as the Bill received the royal assent, Mrs Pankhurst died at the age of 69.

Many saw this Act as the end of the women’s movement, assuming that women would never again have to struggle for their rights. The Prime Minister, Stanley Baldwin, expressed these thoughts in Parliament: “The subjection of women, if there be such a thing, will not now depend on any creation of the law . . . Women will have, with us, the fullest rights. The justification for the old agitation is gone, and gone for ever” – it was an inaccurate prophecy, as the next 50 years were to prove.