“Season of mists and mellow fruitfulness”

This edited article about autumn originally appeared in Look and Learn issue number 1019 published on 19 September 1981. 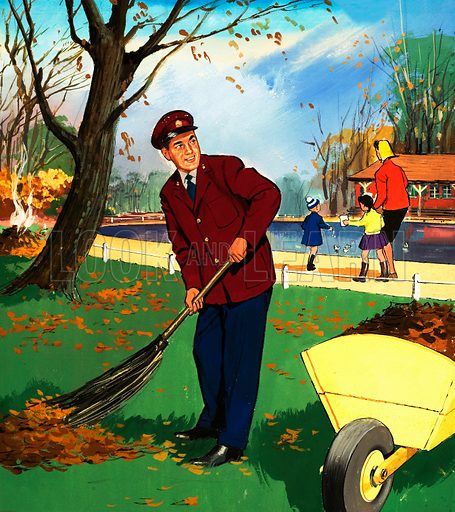 The park attendant sweeping up leaves in autumn

“Season of mists and mellow fruitfulness” wrote the poet Keats, capturing in a few words something of the beauty, and softness, of autumn. The Americans call autumn the fall – the time of the year when the leaves fall from the trees, and the countryside is rich with the fruits of summer. Autumn is a season of plenty, when animals and birds must feast on the ripened fruits and berries to prepare for the months of winter, or perhaps to store fat to fuel the long migration flight to Africa.

As the leaves turn to their autumnal tints of gold, red and brown, so we start to notice the fallen fruit. Horse chestnuts are one of the first trees to drop their leaves, and with them fall the conkers, the heavy, rich seeds spilling out of the spikey, protective casing which has protected them during their growth.

Conkers may be pleasing to handle, but they are inedible, unlike the similar fruit of the sweet chesnut, which is protected by an even pricklier husk. For a true autumnal feast, gather a few handfuls of sweet chestnuts and roast them over an open fire.

Though conkers may be the most noticeable of tree seeds, many other trees are now producing seeds. From the sycamore trees spin the familiar keys, which carry far on the autumn winds, and explain why this introduced tree is so common in our woods and hedgerows. Alas, the sycamore’s success is at the expense of more valuable native trees. Sycamores often have to be cleared from nature reserves, for they are not attractive to wildlife.

Scots pine is a native of Britain, and, unlike the sycamore, its seeds are of value to wildlife, and form the principal diet of the crossbill, a bird which has specially adapted mandibles to enable it to extract the seeds from the pine cone.

Pine cones take two years to mature: the female conelets first appear in May at the end of newly expanded shoots. Once they have been fertilised they set to form small, green cones, before finally maturing into the familiar woody cones which open to release their seeds in spring. Thus, though the Scots pine does not usually release its seeds for another six months, the 18-month-old cones are by this time large and conspicuous.

Like the Scots pine, the plane tree does not release its seeds until the following year, but it drops its leaves to reveal the brown “bobbles” of fruit dangling from the bare branches. Plane trees grow well in cities, for they can resist the traffic fumes and pollution which would kill many less-tolerant species; so when walking in town in late autumn, look for the fruit of the plane tree dangling high above you.

Oak is by tradition the national tree of England, and it is one of the finest and most important trees of the countryside. Not only is its timber of considerable commercial value, it is very important to wildlife, for it supports the greatest variety of insects of any British tree.

In a good acorn year, thousands of these hard seeds will litter the ground beneath the oaks, attracting a host of wild animals and birds – pheasants, wood pigeons, squirrels and dormice all make use of this ample food supply, which will often last well into January. In some country districts the farmers will let their pigs out to forage for acorns.

The so-called oak apple often confuses people, for it is not an apple at all, but is formed by a minute gall wasp. Look at an oak apple in autumn and you will see a tiny hole where the larvae of the gall wasp has left the security of its first home.

Hedgerows in autumn are often among the most exciting places to explore, for the majority of hedgerow trees are rich in fruit. The berries of the rowan or mountain ash are a brilliant scarlet by mid-September, and soon attract hungry birds.

Another favourite with the birds – particularly the fieldfares and redwings that visit our islands in winter – is the hawthorn. The berries of this shrub often cling to the tree long after all its leaves have dropped.

While the hawthorn berries might not be of much interest to humans, the berries of the elder certainly are. These are found in heavy, purple-black clusters, and are full of juice which makes very good elderberry wine.

Hedgerow bottoms are usually filled with a tangle of brambles, but if you are prepared to risk being scratched, you can often pick a few pounds of blackberries in an hour or so on a late autumn day.

Growing alongside the brambles you might notice the bright red rose hips, a reminder of the wild roses which brightened the hedge in summer.

A widespread plant of hedgerow bottoms in southern England is the stinking iris, or gladden lily, and in autumn its seed capsules open right out to reveal bright orange berries. If you want to know how it got its name, try crushing one of its dark green leaves and you will have the answer!

As you explore the autumnal hedgerows and woods, look out for the birds and animals sharing the harvest with you. Fallen apples attract crowds of wasps, which become drunk on the fermenting fruit, while they may be joined by red admiral and comma butterflies making the most of the gentle warmth of the sun. Both these butterflies hibernate, unlike the orange tip, which spends the winter in the pupal stage. If you search carefully you might even find the orange tip’s pupae, which usually pass the winter unobtrusively on twigs.

Overhead, swallows and house martins will twitter excitedly, while normally insectivorous birds like blackcaps will gorge on blackberries. These summer migrants will soon be gone, flying south to Africa, where food is much easier to find during the northern winter, leaving the remains of the plundered fruit to sustain those creatures which are able to withstand the rigours of the dark months of winter.