Elizabeth I and the problem of Mary Stuart

This edited article about Elizabeth I originally appeared in Look and Learn issue number 1005 published on 13 June 1981. 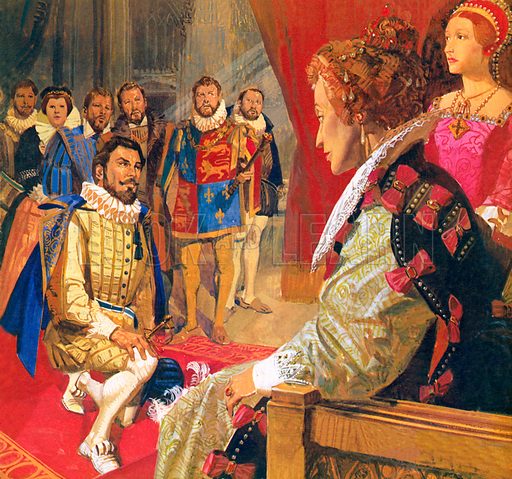 “This is the Lord’s doing and it is marvellous in our eyes.” With these words 25-year-old Princess Elizabeth greeted the news, brought to her at her home at Hatfield House in Hertfordshire, that her half-sister Queen Mary Tudor was dead and she was Queen of England.

Indeed, the new reign was to be marvellous in everyone’s eyes. The Elizabethan age, 44 glorious years long, was England’s greatest age – the age of Raleigh, Drake, Spenser, Shakespeare; of bold adventurers and brilliant writers. Over them the new queen was to rule with a firm hand and a fickle heart – but also with a passion that made up for all her faults.

“Nothing,” the queen told Parliament, “nothing – no worldly thing under the sun – is so dear to me as the love and goodwill of my subjects.”

At once Elizabeth set about decision-making calculated to endear her to those subjects. Within a year of her accession she was made Head of the Protestant English Church. For her chief minister she chose Sir William Cecil, who later became Lord Burghley, a remarkable man who guided England’s destiny for almost all the reign.

Cecil, and many others of Elizabeth’s advisers, feared a plot against the life of their proud, redheaded queen. The hopes of the Church of Rome in restoring the Catholic faith to England now rested upon Mary Queen of Scots, and it was from her supporters that Elizabeth’s ministers expected the plot to come.

Mary, who was married to the King of France, was a great-granddaughter of Henry the Eighth and considered that she had a better claim to the English throne than Elizabeth. But when an English fleet sailed into the Firth of Forth and took Leith, she agreed to give up her claims. When, in 1560, her husband died, Mary, then 19, went to Scotland to rule as a Catholic over a Protestant country.

Five years later Mary married again. Her new husband was her cousin, Lord Darnley, who became so jealous of his wife’s secretary, David Rizzio, that he had Rizzio callously murdered in Holyrood Palace.

A year later a house in which Darnley was lying ill was blown up with gunpowder. The Earl of Bothwell, a friend of Mary’s, was charged with the murder, but the charge could not be proved. When Mary married him three months later, everyone believed that she and Bothwell were together responsible for the crime.

The result was that Mary was disinherited and her little son was proclaimed King with the title of James the Sixth. Escaping from the castle where she was held prisoner, Mary fled to England and made the fatal mistake of asking her cousin Queen Elizabeth to give her protection.

For the next 19 years Mary was shifted from one castle or country house to another, while her enemies at Elizabeth’s court did their utmost to convince the queen that because Mary would always be the centre of some Catholic plot or other, she was too dangerous to be allowed to live.

If Elizabeth gradually hardened her heart against the captive Queen of Scots she permitted it to crack a little when confronted with a bombardment of charm and gallantry aimed by that courtliest of courtiers, the adventuring seaman Sir Walter Raleigh.

But Raleigh found that Elizabeth was a woman who demanded complete loyalty from her admirers. She enjoyed the fawning and the flattery, and in return she lavished gifts and money upon those around her, but she considered it an affront if any handsome man at court should choose to marry.

This offence was committed by Sir Walter Raleigh when he began to pay court to the daughter of Sir Nicholas Throckmorton. The queen, upon discovering this, flew into a fearful rage, and at once had both the “offenders” placed in the Tower.

Raleigh knew his Elizabeth well, though, and saw to it that a letter extolling her charms should fall into her hands. “How can I live alone in prison while she is afar off?” he wrote. “I who was wont to behold her riding like Alexander, hunting like Diana, walking like Venus – the gentle wind blowing her fair hair about her cheeks like a nymph.”

That was just the sort of thing that Elizabeth loved. She ordered Raleigh’s release from the Tower, but forbade him to return to court.

But to Mary Queen of Scots she had shown herself less indulgent. In September, 1586, a conspiracy against Elizabeth was discovered and seven conspirators were arrested, whereupon Elizabeth suggested that there should be found “some new device” for putting them to death.

She was advised by Lord Burghley, however, that “the punishment prescribed by the letter of the law, was to the full as terrible as anything new that could be devised, if the executioner took care to protract the extremity of their pains in the sight of the multitude.”

This the executioner did, cutting down his victims before they were dead and then slowly finishing them off.

Finally, in February, 1587, Elizabeth’s ministers signed the order for Mary’s execution. Whether Elizabeth gave her final consent to it or whether the ministers acted on their own initiative has never been proved. We are told, though, that upon hearing the sound of bells and bonfires on the evening of 9th February, Elizabeth inquired what the celebration was for and was informed that it was to mark the putting to death of Mary, whereupon she made no comment.

But by the next morning there were tears and recriminations and she “fell into some heat and passion”. A minister named Davison was made a scapegoat for the execution, ordered to pay a £10,000 fine and to be detained “during her Majesty’s pleasure” – or rather displeasure.

This was Elizabeth at her moody and capricious worst – and her courtiers were very familiar with it. They had seen her leap at the idea of one marriage after another, hesitate, draw back, and leap again.

An outrageous flirt, the queen held out the prospect of marriage to many a worthy foreign nobleman, but underneath the idea there was always some piece of calculated political cunning.

Thus Elizabeth expressed herself as favourable to the idea of marrying the French Duke of Anjou, because such a marriage would have ended intrigues to rescue Mary Queen of Scots. When this was put aside, she dallied with the Duke’s younger brother, the Duke of Alencon, who was 20 years her junior and badly disfigured by smallpox.

But opposition to the marriage in England grew daily. It was voiced in violent language in a pamphlet by one John Stubbs, and Elizabeth became very angry. Stubbs and the printer were arrested and condemned to lose their right hands and be imprisoned. The printer was pardoned but Stubbs had to suffer the punishment and, after being mutilated, he took off his hat with his left hand and cried, “God save the Queen”. Then he fainted.

The spectators stayed silent, which showed where their sympathies lay. They certainly did not want the Duke of Alencon as their Prince Consort. Fortunately perhaps for England, Alencon died of fever. Gradually after that, the importance of the royal marriage question began to fade, for Elizabeth was growing out of the age of child-bearing, and the only reason for a marriage, in the nation’s eyes, was to produce an heir to the throne.

Elizabeth knew, too, in her heart of hearts, that whoever she chose as her husband would provoke a large section of her subjects to hostility. And she cared a great deal for power, and also for public opinion.

“I am married to my kingdom!” she cried, when once she was urged to marry, and there was to be no other “husband” for her.