The beginnings of Byzantium

This edited article about Byzantium originally appeared in Look and Learn issue number 1000 published on 9 May 1981. 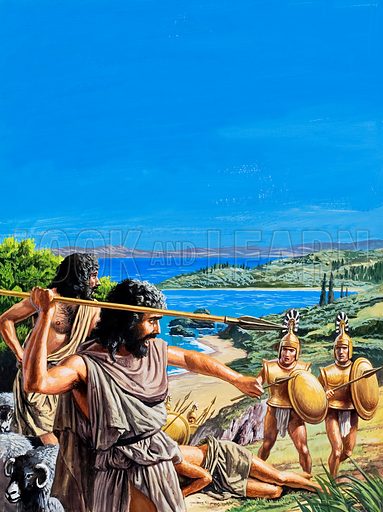 When the Megarians landed at what would become Byzantium they met brave but short-lived resistance from Thracian tribesmen. Picture by Roger Payne

In the history of ancient Greece, the little town of Megara, lying just to the west of Athens, was fated to be overshadowed by its Famous neighbour. But its citizens were enterprising people, and about the middle of the seventh century BC some of them embarked on a venture which was to have far-reaching consequences.

At that time many Greek cities were sending out parties of settlers to found colonies in regions as far apart as Sicily and Asia Minor. The Megarians had the vision to see that one of the most important sea-routes was the one that led through the Hellespont (the Dardanelles) and the Bosphorus to the Black Sea.

They had already planted one colony there – Chalcedon, on the eastern shore of the Bosphorus. They now proposed to found another. The name of the man to whom the leadership of the venture was entrusted was Byzas.

The Greeks put great faith in the advice of oracles, the most famous of which was the one at Delphi. When asked which would be the best site for the new town, the priestess at Delphi advised Byzas to settle “opposite the city of the blind”.

Whether the Megarians made any sense out of this is not clear. But the spot that Byzas chose stood opposite Chalcedon – and afterwards it was said that the founders of that city must indeed have been blind to have preferred the eastern shore to the magnificent site on the other side. For here Byzas found a hilly peninsula, triangular in shape, projecting into the mouth of the strait; well suited for defence, and almost perfect in many other ways.

On the south side of the peninsula lay the Propontis (the Sea of Marmara); on the north was a five-kilometre-long inlet, forming an excellent anchorage. This later became known as the Golden Horn. The city’s position offered control over the entry to the strait; and, since this is the narrowest crossing between Asia and Europe, it commanded a vital east-west land route.

In the surrounding, waters there was an abundance of fish, while inland lay fertile lands and forests to provide timber. Only the climate, which was subject to fierce winds from north or south, and often oppressively sultry in summer and bitterly cold in winter, could be said to mar this almost ideal situation.

The Megarians did not take possession of the place unopposed. It was occupied by Thracian tribesmen, peacefully tending their sheep. They were prepared to put up a fight for their home; but against the determined and well-armed Greeks, who considered such “barbarians” of no account, they had no chance, and were driven away.

The new settlement was named Byzantium, after its founder. At first the town did not extend much beyond the hill which commands the strait and the entrance to the Golden Horn. A wall was built around the base of the hill, from the Golden Horn to the Sea of Marmara. But as the years passed the town was gradually extended.

As was the way with most Greek colonies, Byzantium was quite independent of its mother-city, Megara. Yet, remote though it was from the centre of Greek affairs, it found itself caught up in the many conflicts in which the city-states of Greece were involved.

When, in the late sixth century BC, the expanding Persian empire spread its power to the Aegean Sea, imposing its will upon the Greek cities of Asia Minor, Byzantium, too, fell under its sway. Like them, as Persia’s fortunes ebbed, the city regained its freedom.

In the bitter and drawn-out struggle between Sparta and Athens for supremacy in Greece, Byzantium found herself now on one side, now on the other – and often the object of attack. Yet the city survived. In 343 BC it even resisted successfully a siege by Philip II, the warrior king of Macedon, then seeking to bring all Greece under his rule.

The Byzantines attributed their escape to the influence of Artemis, goddess of the Moon, since bright moonlight enabled them to detect and thwart an attempted night attack, and celebrated by issuing coins bearing her symbol, the Moon – an emblem that was to remain associated with the city long after its pagan origin was forgotten.

When Philip’s son, Alexander the Great, assumed power, the Byzantines wisely accepted his overlordship; but by the beginning of the second century BC another great military power was making itself felt – the strong hand of Rome. Yet, as the Romans overran Greece and Asia Minor, Byzantium suffered little. It was declared a free city, and its trade prospered.

At last, however, in AD 196, Byzantium found itself once more faced with the problem of choosing which side to join in a quarrel which was not its own. For at this time two men claimed to be Emperor of Rome – Septimius Severus, who had seized power in Rome and the West, and Pescennius Niger, who ruled the eastern part of the empire.

Byzantium gave its allegiance to Niger. But at Issus, in south-east Asia Minor, Severus defeated and slew his rival. He then shipped his army to the Bosphorus, resolved to punish the Byzantines.

For the first time, the city suffered the full weight of an attack by a Roman army. Prayers to Artemis were in vain; the defences were overrun, the city largely destroyed and many of its inhabitants massacred.

Later Severus seems to have had a change of heart. He had the city rebuilt, with new walls enclosing a larger area. But some 70 years later it again incurred the wrath of a Roman emperor, Gallienus, and was once more attacked and sacked.

Somehow Byzantium, though reduced in importance, survived these misfortunes. Its merchants still thrived, its fishermen brought home their plentiful catches. Probably the citizens were happy enough to be left alone to lead their lives; but fate had in store for their city a future more glorious – and more eventful – than they could ever have guessed.