The complex story of chess

This edited article about chess originally appeared in Look and Learn issue number 1000 published on 9 May 1981. 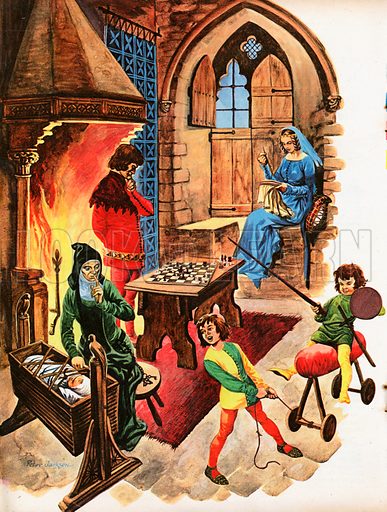 Domestic leisure in the castle living room, by Peter Jackson

One of the many legends about the origin of chess says that the philosopher Sassa invented it to distract the Indian king Balhait, who was becoming bored with his usual game, backgammon. Balhait was so pleased with this interesting new game that he offered Sassa a choice of valuables – jewels, money, or land.

The philosopher replied that he lived modestly and wanted only a little corn. “If it please Your Majesty, we can decide the amount by using my invention. I propose we take a chessboard and place one grain of corn on the first square, two on the second, four on the third and continue doubling until all 64 squares are covered.”

The king thought this was a modest price and gave orders to his treasurer to fetch the corn from the granaries. But next day Balhait’s ministers told him that his country faced a famine. The granaries had been exhausted long before the 64 squares were covered. Sassa’s reward amounted to 18,446,744,073,709,551,615 grains of corn – enough to cover the whole of England to a depth of nearly 12 metres.

In reality, chess was probably evolved from simpler board games, rather than invented by a single person. There are six different types of chessmen, and in the game’s early days, around AD 500, a six-sided dice may have been thrown to settle which piece should be played. Eventually each man got its individual way of moving, but Indian chess was a much slower game than the modern version.

The names and functions of the pieces in Indian chess symbolised a battle between two armies of the period, which each had a king and his minister together with four fighting divisions.

The eight foot-soldiers, now the pawns, were restricted to a plodding, forward movement. The elephant (modern bishop) moved diagonally two squares at a time and could gallop over an intervening piece. The horse, which is identical to our knight, was also a cavalryman, which could leap over both friends and enemies. The chariot – which became rukh and then rook as chess spread to other nations – was the strongest unit, and could be played along the whole length and breadth of the board.

The king and minister were both restricted to moving a single square at a time, so that the latter, which in modern chess has become the queen and the most powerful piece, was in the early days among the weakest.

Indian warfare at the time was often decided by the capture or death of the king, which automatically dissolved his army. But the unknown authors of chess wanted to emphasise that a monarch’s person was sacred; so the game was won and lost when the king’s capture was inevitable in the next move rather than when it actually happened.

From India, chess spread westwards to Persia, and acquired two new rules. When you attacked your opponent’s king, you uttered the warning word “Shah!” (which has now become “check”) and when the king was certain to be captured the winner announced the game’s end by saying “Shah mat”. “Mat” is Persian for defeated or helpless, so “Shah mat” is the origin of checkmate.

The Arabs overthrew the Persian Empire about AD 650, and the caliphs, the supreme Arab rulers, were fascinated by chess. The celebrated Harun al-Rashid, of the Thousand and One Nights, was a chess patron and gave pensions to the best players in his service. He bought a slave girl, who was a chess expert, to help him practise. She beat him three times in succession and was rewarded with the life of her lover, who faced execution.

Western Christendom learned of chess from the Arab world west of Egypt, from the Moors in Spain and from Viking travellers. It was a court game, widely played among royal families and the nobility. King Canute learnt it in Rome and the story of his match with Earl Ulf at Roskilde, Denmark, in 1027, forms part of the great Nordic sagas.

Ulf was the uncle of King Harold of England who was killed at the Battle of Hastings. Canute, engaged in a fierce running battle with the kings of Norway and Sweden, was suspicious that Ulf was leading a faction of nobles plotting against his rule. When he came to visit Ulf in Roskilde, the Earl prepared a great feast and sought to make friendly conversation. He could not understand why Canute remained aloof and silent, so suggested a game of chess.

Play began, and suddenly Canute made a blunder, losing a knight. Ulf could not resist a grin as he captured the piece and removed it from the board. Canute glared at him, put the knight back in place, and said, “I’m going to play a different move.” The quick-tempered Ulf would have none of it; he bluntly told Canute that, king or not, he could not retract moves once made on the board.

Canute refused to give way and Ulf, losing his self-control, picked up the board and threw it down, scattering pieces all over the floor. As he stormed out of the room, Canute shouted, “Are you running away, Ulf the coward?”

Ulf retorted, “You didn’t call me Ulf the coward when I came to your help when the Swedes were beating you like dogs.”

Next morning, Canute ordered one of his bodyguard, Ivor the White, to kill Ulf. Ivor found the earl praying in church and slew him there and then, to the horror of the watching monks. The incident shows a very different Canute from the traditional story in which he calmly demonstrates to his sycophantic courtiers that even a king cannot turn back the incoming tide.

Chess came to England around the time of the Norman Conquest, and by 1100 the Normans were using a chequered board to count government money. The department acquired the name Scaccarium, and this is the origin of the modern Exchequer, which is responsible for Britain’s finances.

Chess playing standards in medieval Europe were extremely low. The Arabs had written some instructional books, but Caxton’s 15th century The Game of Chesse, though only the second book ever printed in the English language, was a translation from French and consists largely of parables and sermons using chess to drive home its points. It was around this time that the piece standing next to the king was regarded as his wife, the queen, instead of as a minister. What was first called “mad chess”, where the queen became the strongest piece, speeded up the game dramatically and transformed its strategy.