Survivors of the fossilised past

This edited article about prehistoric survivors originally appeared in Look and Learn issue number 1000 published on 9 May 1981. 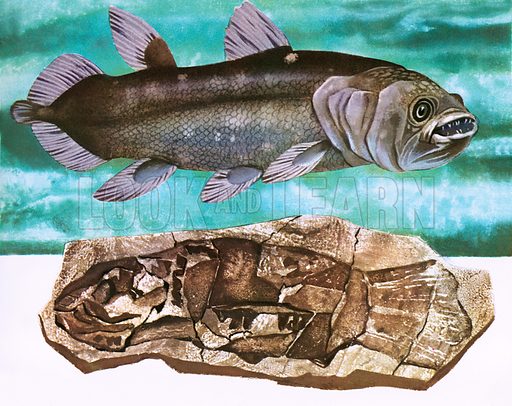 The Coelacanth and its fossil

Puzzling out how animals and plants existing today evolved and what their early ancestors were like is a problem that has always fascinated biologists. Fortunately nature has left us with a remarkable fossil record, locked up in rock strata of many kinds around the world.

Unfortunately these stone replicas provide us only with tantalising clues as to how they actually existed in life. But there are a few representatives of these early animals and plants surviving almost as “living fossils”. They give us a unique insight into how some of the extinct species may have lived millions of years ago.

Around 250 million years ago a great dynasty came to an end – that of the trilobites. Their fossils are abundant, generally showing 70-100 millimetre long bodies with a hard outer covering of lime and chitin, and paired, jointed legs attached to each body segment. They were the first creatures to develop high-definition eyes and appeared to spend most of their time grubbing about on the sea bottom in search of food. A distant relative, however, survives in deep coastal waters of the Atlantic and Indian Oceans. This creature is the horseshoe crab, Limulus.

One species survives on the eastern seaboard of the United States and another four in the deep coastal waters of South-East Asia. At 30 cm across, it is much larger than any of the fossil trilobites. Like the trilobites, it is divided into three sections. The front one, or prosoma, appears like a huge domed shield of chitin. The first pair of pincers are used for pulling out worms and thin-shelled molluscs from the sand or muddy bottom on which it lives. On the prosoma there are two bean-shaped eyes and between these two much smaller ones which are sensitive to ultra-violet light.

These strange creatures are seldom seen except for three successive nights of each year when the moon is full and the tides are high, when they emerge from the sea in their hundreds of thousands, littering the beach for kilometre upon kilometre. Females are closely followed by four or five males scrabbling around for a turn to mate, after which the female lays her eggs in the sand and returns to the sea.

When horseshoe crabs first crawled out onto the shore to lay their eggs, the world was quiet, for no other animals had yet emerged from the sea to live on land. Now hordes of sea-birds gather to feed upon the eggs. After about a month the eggs hatch, bearing such a close resemblance to trilobites that they are generally called trilobite larvae.

When the crustaceans took over from the trilobites they diversified into many species. There is one peculiar order which resembles the horseshoe crabs. It comprises Triops and Lepidurus, the tadpole shrimps. They have large shield-shaped shells and as many as 71 pairs of limbs beneath. Triops favours temporary pools in dry areas or rice paddies, where it can become a pest, uprooting seedlings as it searches for food. In total contrast, Lepidurus lives in pools in the Arctic, which may freeze solid without causing it any apparent harm.

One hundred million years before the trilobites died out, creatures with bony, limb-like, fins began crawling out of the sea and onto the land. It was from fish-like animals such as these that the amphibians and later the reptiles evolved. These fish ancestors were thought to have died out 70 million years ago, but in 1938 a trawler, fishing off South Africa, caught an extraordinary creature.

It was about 1.5 metres long, had powerful jaws and armoured scales and weighed over 55 kilos. When the catch was landed in East London, Miss Courtney-Latimer, curator of the local museum, came down to look at it and realised it was something very special. She wrote to Professor J. L. B. Smith, a noted authority on African fish, who recognised it as a coelacanth.

Another 14 years elapsed before a second coelacanth was caught, this time in the Comoro Islands of the Indian Ocean, and since then several dozen have been netted; although none has survived more than a few hours. The coelacanth’s fleshy pectoral fins are probably very similar to those used by its ancestors to make the first steps onto land. To cope with this situation they also developed lungs, degenerate versions of which can still be seen in the coelacanth today.

At the time these early fishes were invading the shore, forests of giant club mosses and horsetails, collectively known as Pteriodophytes, were also colonising the land. Reaching heights of 40 metres, they formed forests in which many other plants could grow. Together with other groups, these formed the world’s coal deposits of the Carboniferous period. Whilst fossils of these early giants are regularly found in our coal-mines, today’s representatives are much smaller and less numerous.

Now there are about 900 species of club moss native to tropical mountains and northern forests of both hemispheres. They are evergreen herbs with needle leaves possessing cone-like clusters, each with a kidney-shaped spore at the base. They do not compare with their giant ancestors but one “living fossil”, the giant horsetail Equisetum giganteum, certainly does.

This species grows to a height of 18 metres in the forests of South America where, owing to its thin, hollow stem, it has to gain support from the surrounding vegetation in order to stay upright. Only one genus of horsetails remains. This comprises jointed, perennial herbs growing in rich moist soils in all parts of the world except Australasia.

The ginkgo or maidenhair tree is the only living representative of a group which dates back 250 million years. They were known from the fossil record long before they were discovered in temple gardens in China and Japan and, very recently, in the wild.