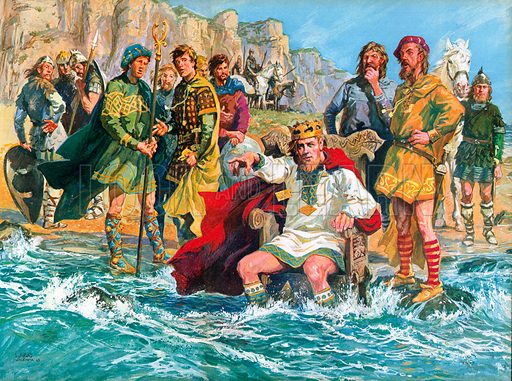 In the patchwork of history, there are stories where the strands of fact and legend are hard to unravel. One such story concerns Canute, King of the English, the Danes and the Norwegians.

It is said that one day Canute took his courtiers to the seashore. A chair was set for the king at the edge of the lapping waves. The tide was coming in, and Canute, stretching out his hand, cried:

“I command you to stay!” The courtiers waited breathlessly; but the tide kept coming in. Soon the water swirled about the king’s ankles, and he stood up.

“Listen all to me!” he said. “Now let men know how empty and worthless is the power of kings.”

Some scholars think that Canute’s attempt to stem the tide was an act of arrogance. Others suggest that it was meant to rebuke his courtiers, who constantly told the monarch what a great and powerful ruler he was.

We cannot tell whether the incident really occurred, but, by looking at what is known of Canute the man, we can form an idea as to its likelihood.

In 1013, when only 18, Canute accompanied his father, King Sweyn of Denmark, on an invasion of England. They soon overran the country; but on Sweyn’s death the following year, Canute, harried by the English under Ethelred, was forced to withdraw. Before setting sail, however, he took brutal revenge on the hostages whom his father had seized. He had their ears and noses cut off.

In 1015 he returned to England, and gained a series of victories. Finally, at Assandun (Ashington), in Essex, he defeated Edmund Ironside, who had succeeded his father Ethelred, in a decisive battle. Canute was acknowledged King of England and his first action was to order the murder of the most powerful noblemen of England. Edmund Ironside also perished, probably at Canute’s instigation.

There is little sign so far of the noble monarch of the legend. Yet once his throne was secure a subtle change came over Canute, and his rule is said to have been just and wise. He sent his Danish warriors back to Denmark, and put his trust in the English.

He was still, it is true, given to fierce rages. In one such fit, he killed one of his servants. But, overcome with remorse, he sentenced himself to a sum nine times the assessed value of the man’s life – a harsh penalty then for the killing of a mere servant.

Increasingly, towards the end of his life, Canute showed himself a man of wisdom and even of humility. It is not impossible, therefore, that Canute did indeed allow the tide to wet the royal feet to show how puny is the mortal power of kings.