William Rainey was born in Kennington, London, in 1852, the third son of George Rainey, a surgeon and lecturer at St. Thomas Hospital, and his wife Martha (nee Dee). 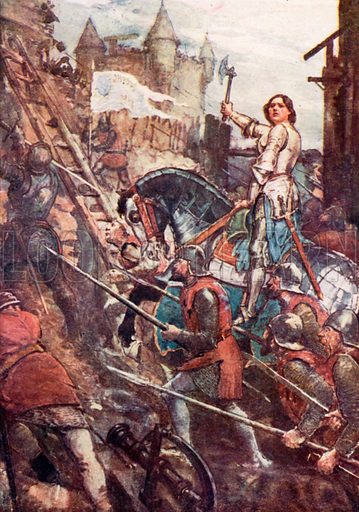 Joan of Arc as depicted by William Rainey

Rainey studied at South Kensington School of Art and the Royal Academy Schools and was landscape and figure painter in watercolours as well as a book illustrator, noted for his delicate brush strokes. He won medals at the Chicago (1893) and Paris (1900) exhibitions and was elected to the RI in 1901 and ROI in 1932.

He illustrated numerous books, including works by G. A. Henry, Charles Dickens, Charles Kingsley, William Makepeace Thackery, Mrs. Molesworth and L. T. Meade, among others. He was also a regular contributor to numerous magazines, including Black and White, The Boy’s Own Paper, The British Workman, Cassell’s Family Magazine, Chatterbox, Chums, The Girl’s Own Paper, Good Words, The Graphic, The Harmsworth Magazine, The Illustrated London News, Little Folks, The Ludgate Monthly, The Penny Magazine, Punch, The Quiver, The Strand Magazine, The Temple Magazine, The Windsor Magazine and Young England.

Many more pictures by William Rainey can be found at the Look and Learn picture library.