Arthur Moreland was an English artist noted as an illustrator of caricatures and humourous drawings. 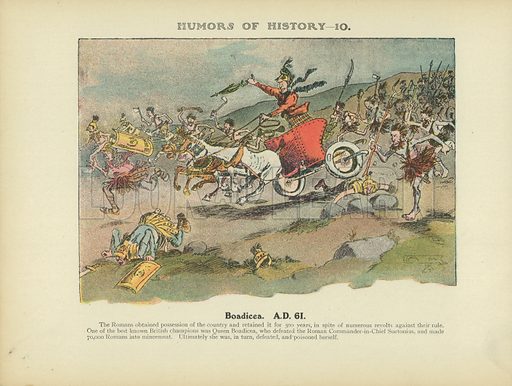 Born in Ardwick, Lancashire, in 1867, the son of Edward and Elizabeth Ann Moreland. He originally worked as a commercial traveller, subsequently moving to London when in his mid-20s, where he began working in the advertising department of the Star. A vivid caricature drawn by Moreland of Ernest Parke, then an executive on the paper, found its way to its subject and, rather than being dismissed, Moreland found himself appointed to the art staff.

He became the political cartoonist for The Morning Leader and his work was reprinted as Humors of History (London, Roxburghe Press, 1898; revised 1924) and More Humours of History (London, T. Werner Laurie, 1925). During the war, he produced The History of the Hun (London, C. Palmer & Hayward, 1917) in a similar vein and The Comic History of Sport (London, T. Werner Laurie, 1924), reprinted material from All Sports.

His cartoons were noted for their pungeant wit and it is said that they contributed to the Tory landslide of 1906 and the revival of Liberalism. He retired from drawing political cartoons during the Great War and instead worked freelance for many papers. His work was exhibited at the Coronation Exhibition in 1911.

He also illustrated books for others over the years, including The Gentle Golfer by Dr. Macnamara (Bristol, J. W. Arrowsmith, 1905), The Difficulties of Dr. Deguerre by Walter R. Hawden (London, C. W. Daniel, 1926) and Lays from Lancashire by Nelson Jackson (London, T. Werner Laurie, 1930).

Moreland was the Hon. Secretary of the Press Club for over 20 years from its early days in Wine Office Court. He was chairman for four years and, on his retirement, was made a life member. He was also a member of the Savage Club and a life member of the Newspaper Press Fund.

When he retired from newspaper work, he wrote and illustrated two books on Dickens, Dickens in London (London, Cecil Palmer, 1928) and Dickens Landmarks in London (London, Cassell & Co., 1931). He also devoted much of his time to painting watercolours in the Lake District. Eventually his failing eyesight and asthma limited his trips and he lived in retirement in the country.

Moreland died at Groombridge, Sussex, in 1951, aged 83, survived by his wife (Blanche Ada, nee Rayson, whom he married in 1896), a daughter (Mary Hermione) and two sons (Edward Rayson and John).

Many more pictures by Arthur Moreland can be found at the Look and Learn picture library.