Stanley L. Wood was a noted British artist whose talents are recognised worldwide. 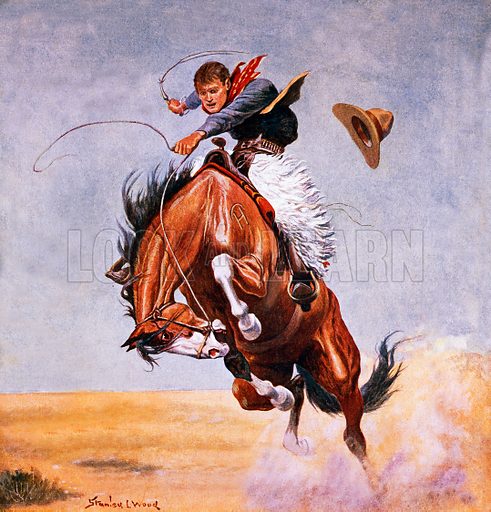 A cowboy trying to break in a horse, illustrated by Stanley L. Wood

Wood grew up in Christchurch, Monmouthshire, and travelled with his father to America at the age of 12, where his father had bought a ranch in Indian territory in Kansas, the bodies of the former owners, who had been murdered by a raiding party of braves, being buried in the garden. Shortly after James Stanley Wood’s death, the house was surrounded by Ute Indians. To scare them away, Charlotte had her children put on riding boots and spurs and they tramped up and down the stairs and from room to room, making as much noise as possible. The ruse worked and, believing the house to be heavily occupied, the natives retreated.

Charlotte and her family returned to St. Pancras, London. He went on to become a prolific illustrator of newspapers and magazines, including Black and White, Boy’s Own Paper, Cassell’s Magazine, Chums, The Graphic, The Harmsworth Magazine, The Idler, The London Magazine, The Pall Mall Magazine, Pearson’s Magazine, The Penny Magazine, The Sporting and Dramatic News, The Strand Magazine, Wide World Magazine, The Windsor Magazine and Young England. As a painter he also exhibited at the Royal Academy.

He was especially known for his western art and was sent in 1888 to South Dakota by The Illustrated London News, where he was able to gain an authentic view of the wild west which he infused into his illustrations.

Wood, of 23 Windsor Road, Palmers Green, Middlesex, died at his home on Thursday, 1 March 1928, aged 61. He had been ill for some weeks and, although he could not raise himself from his bed unaided, insisted that he continue working on his final illustration – for a ‘Kettle’ story – with his wife and son supporting him.

For such a major artist, he left little in the way of rewards, leaving his widow of legacy of only £114 15s.

Many more pictures by Stanley L. Wood can be found at the Look and Learn picture library.